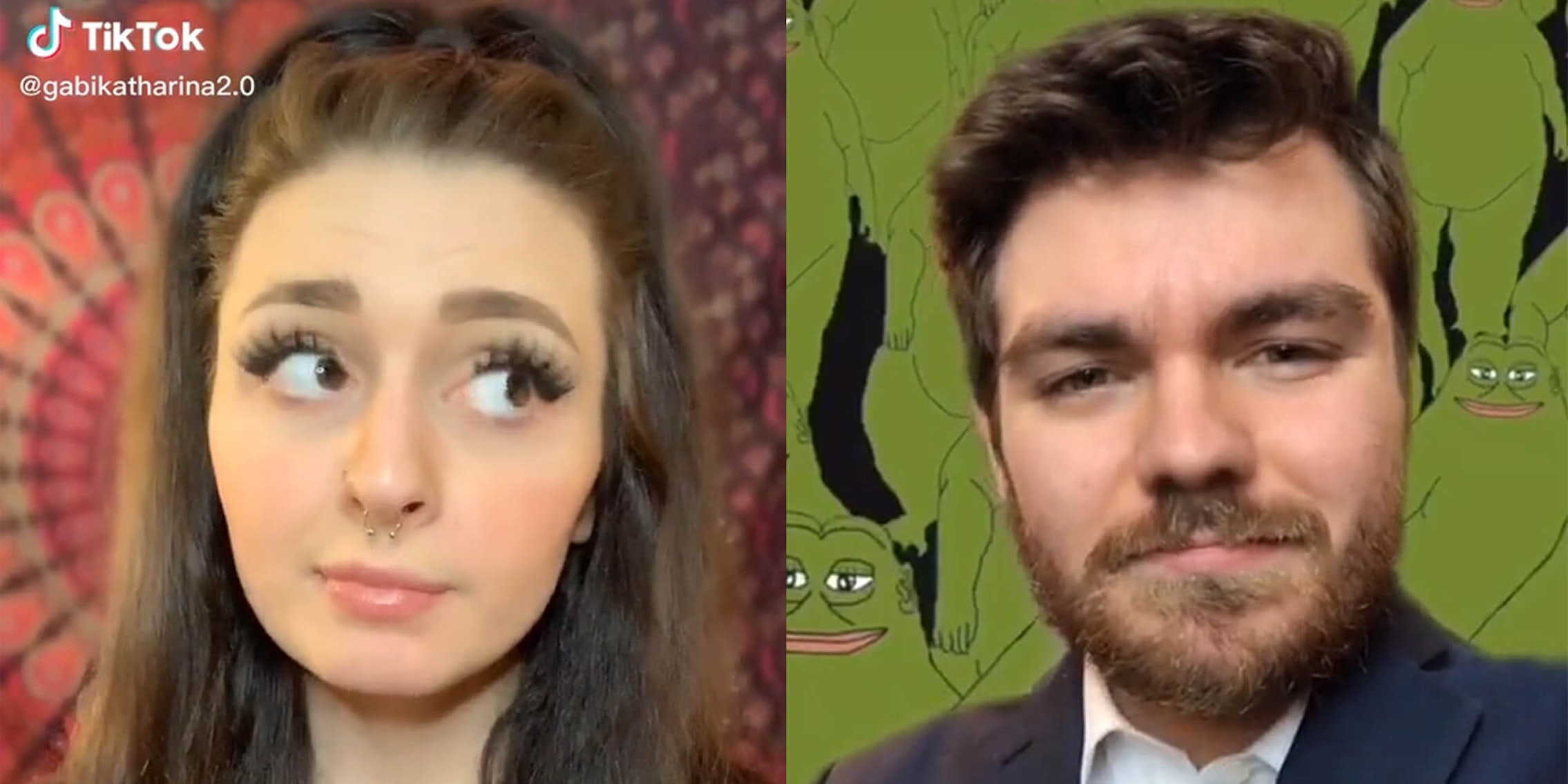 This woman criticized white nationalists on TikTok. It led to an internet-wide harassment campaign

The harassment was unsettling.

Teen political TikToker Gabriella Katharina Huggler never thought she would be the victim of alt-right trolls and white nationalists across all her social media platforms.

But over the past two weeks, she’s faced an onslaught of “Groypers” who are threatening to invade her bedroom and floating the idea of killing her.

The cause of all this was Nick Fuentes and his followers, known as Groypers, who have been harassing and threatening her following a TikTok she made calling the movement out.

Groypers are members of Fuentes’ fringe movement on the “alt-right,” a loose collection of conservatives that harbor white nationalists. Fuentes is currently one of its most public faces.

As their chosen mascot, Groypers using an exploitable illustration of Pepe the Frog.

The saga all began when, early last week, Huggler responded to one of Fuentes’ first posts on TikTok, calling out the 21-year-old college dropout for his controversial views.

Huggler, a liberal TikTok influencer in the youth political sphere with over 70,000 subscribers, said she initially responded to Fuentes as an act of “solidarity with other political TikTokers” who were making a point to expose the white nationalist.

In it, she said that “we as political TikTok needed to come together” over Fuentes joining the platform.

But the combination of Huggler being a woman and having a nose piercing—in the eyes of the online trolls—made her an instant target.

“Maybe you’re projecting a little, so why don’t you take your own advice and log off you alt-right scum,” she stated in a response to criticism, firing back at Fuentes’ followers in a TikTok duet.

That video would later get Fuentes himself involved, making a TikTok responding to Huggler by putting on a Cookie Monster hat—a reference to his own Holocaust denialism, which he once made using a baking analogy.

Huggler says that following her rebuttal she received threatening and harassing messages, which only intensified as Fuentes began mocking her on Twitter and TikTok. It spilled over onto other social media sites, such as Instagram and Reddit.

“Fuentes retweeted images and memes of me, which brought his ‘Groypers’ to my TikTok and made the Twitter posts more dangerous and threatening … saying explicit things about me, harmful things towards me,” Huggler told with the Daily Dot.

Last week, following the back and forth-and-attacks online, Huggler took to Instagram Live to chat with friends about all harassment she received, which left her appearing emotional on the live stream.

That was recorded by Groypers who flooded the forum and turned her video into memes.

Numerous TikTok comments reviewed by the Daily Dot show that ‘Groypers’ descended on her channel, using such threats as “we should run electricity through her nose ring,” and that she needed a “self-defense situation at 3 AM through her bedroom window.”

On Instagram, Huggler was threatened with messages which included her home address. Following the harassment on social media—alt-right websites began smearing her as well.

“She is a mediocre e-girl who uses social media to get her daily dopamine fix, nothing more,” one alt-right website stated. “She needs to just shut the hell up, get her ass in the kitchen, and pump out a bunch of white babies for a white man.”

Huggler says the most frightening part of the whole situation is how Fuentes and his followers were able to weaponize Twitter—including making a fake account on the platform to make it appear she was sending people direct messages.

“I think Twitter for me was the scariest part of this ordeal … I’d noticed he’d retweeted memes and some users’ comments on me … The responses to these posts ranged from violent, tone-deaf, to just plain nasty,” Huggler stated.

Under Twitter’s abusive behavior policy, the company maintains that “you may not engage in the targeted harassment of someone, or incite other people to do so. We consider abusive behavior an attempt to harass, intimidate, or silence someone else’s voice.”

Huggler continued, “I felt like I was being spotlighted for speaking up for myself when someone told me my opinion didn’t matter. I had no idea at the time but whenever I went live, white nationalists would post on Twitter to go raid my live [saying] it was my fault TikTok banned Nick Fuentes, even though that is very far from the truth.”

“After my live stream had been sent all over the internet I had to delete my Twitter due to the mass amount of hate.”

The online harassment sparked by the incident left Huggler wanting to take a break from the site—but as of Wednesday, she had returned to TikTok.

In response, Fuentes and the leaders of his “movement” have continued to direct their rank-and-file Groypers to go troll Huggler.

After logging back on TikTok, she was still receiving harassment from Groypers, including “doxxing threats.”

She told the Daily Dot in response to the threats: “I’ve taken the approach of just being kind to these people.”