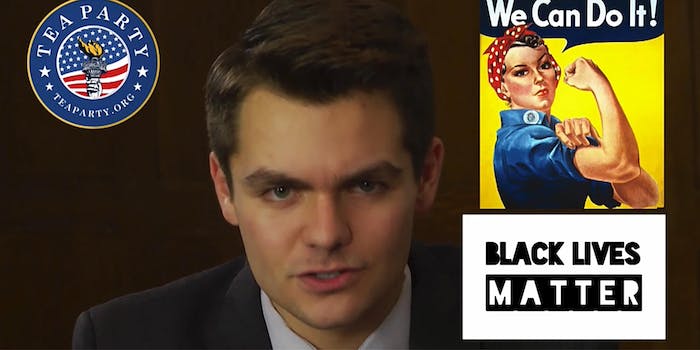 What a difference a few years makes.

Nick Fuentes, a young white nationalist who attended the “Unite The Right” neo-Nazi rally in Charlottesville, Virginia, has recently used the murder of Ahmaud Arbery to traffic in intense racial hatred on his nightly program.

Video footage shows Arbery was murdered in late February in Georgia by two men who chased down the young Black man in the middle of the street, pulling a shotgun and killing him.

The 21-year-old Fuentes has used Arbery’s death to perpetuate racist tropes. He is no stranger to disparaging people of color, but has ramped it up even more so following the death of Arbery.

He once could be heard on camera touting that he believes Black lives do matter, ahead of a panel discussion back in 2015.

“I, as a Tea Party Republican, believe in equality for women, believe that black lives matter, I believe in social justice,” the now white nationalist declared in a video dated Dec. 8, 2015.

That remark appears to have been made by Fuentes while still in high school, on a program called The N.J.F Show, dedicated to debating guests with contradictory viewpoints.

In it, Fuentes said he agreed with the Black Lives Matter movement, which has, over the past decade, highlighted the use of deadly force against African Americans by police and citizens.

In the video, Fuentes said that while he debated the “means” it used, he supported it on the “ends” it was attempting to achieve.

The Groyper leader ranted this past Wednesday that the actual takeaway from the killing of the unarmed Black jogger is that, “if you have a problem with black people, you’re actually the one that is hunted.”

“And if there is anybody that’s being victimized because of their race, it’s white people,” the host of America First stated.

Fuentes further said that he wouldn’t drive into the “Black neighborhood” in his hometown of Chicago because he “doesn’t look like the people there.”

He further riffed that he had never seen a person of color jog before—which Fuentes billed as evidence that Arbery must be at fault for his own death.

Fuentes didn’t respond to a request for comment from the Daily Dot regarding his remarks.

On Twitter, Fuentes said that: “this shouldn’t have to be said but obviously America is not a place where black people are being hunted for sport by white racists.”

But the Black Lives Matter movement Fuentes previously agreed with has highlighted that that is essentially the case. And in America’s not long ago past, that absolutely was true.

Instead, Fuentes called the shooting of an unarmed U.S. citizen a “procedural impropriety.”

DLive, the platform where Fuentes streams his show, didn’t immediately return a request for comment from the Daily Dot regarding the remarks made on their platform.

The white nationalist most recently found himself booted off of TikTok and YouTube, while leading a harassment campaign against a user who spoke out about his beliefs.

Fuentes is no stranger to espousing racist language and denigrating minorities.

To that he responded, “they would both be degenerate.”