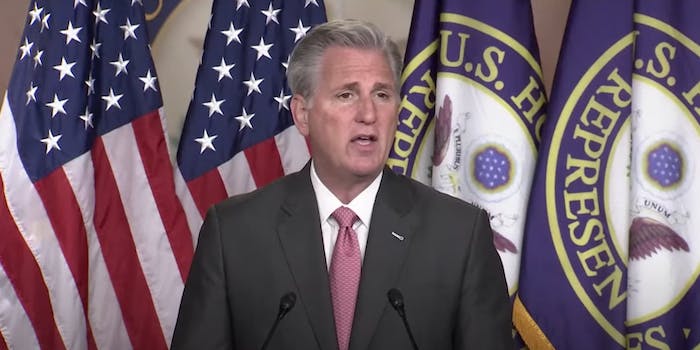 McCarthy is falsely claiming that his colleagues have denounced QAnon.

In a press conference on Thursday, McCarthy was asked about the election of Marjorie Taylor Greene (R-Ga.) and Lauren Boebert (R-Colo.) given their wildly conspiratorial views.

McCarthy responded to the question by stating that the Republican Party was “very diverse” before falsely claiming that both women had denounced QAnon.

“Give them an opportunity before you claim what you believe they have done and what they will do,” McCarthy said. “I think it’s fair for all.”

The QAnon conspiracy is based on the belief that a military intelligence insider known as “Q” is secretly working with President Donald Trump to dismantle a global child-eating pedophile ring run by left-wing celebrities and politicians.

One of the first QAnon references made by Greene came in 2017 when she described Q as a “patriot” in a video on YouTube. But since winning her primary, Greene has made an attempt to distance herself from QAnon in an apparent effort to quell critics.

Greene told Fox News in August that she did not consider herself a QAnon follower and alleged that the characterization was placed on her by the media.

“Never once during my campaign did I ever speak about QAnon or Q,” she said.

But her remarks on QAnon are not the only controversial statements she has made. Greene previously stated that Muslims do not belong in Congress and argued that Muslim politicians should be forced to take their oath of office on a Bible and not a Quran.

Prior to defending Greene, McCarthy had stated back in June that the conservative’s comments were “appalling.”

Boebert, on the other hand, showed support for QAnon in May during an appearance on a conservative internet show.

“Everything I’ve heard of Q — I hope this is real because it only means America is getting stronger and better and people are returning to conservative values,” she said.

Like Greene, however, Boebert has attempted to distance herself from the conspiracy since taking office. Despite McCarthy’s claims, neither have come out to openly denounce QAnon.

Not every Republican is welcoming the two candidates with open arms though. Greene recently got into an argument on Twitter with Rep. Dan Crenshaw (R-Texas.) over what she claimed was his failure to adequately defend Trump.

“You’re a member of Congress now, Marjorie,” Crenshaw responded. “Start acting like one.”