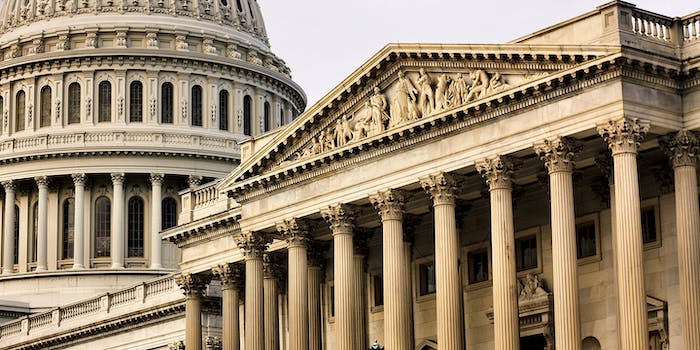 It's not over. But for now, this is bad news for the TPP.

In a victory for opponents of the “global threat to the Internet” known as the Trans-Pacific Partnership, the Senate voted on Tuesday not to advance a bill that would significantly ease the TPP’s passage.

Almost all Senate Democrats joined with a few Republicans in a 52-45 vote, eight short of the 60 votes needed to overcome a procedural hurdle known as cloture before the actual bill can be considered.

Fast track, also known as Trade Promotion Authority, is widely considered necessary for the U.S. to adopt the TPP, a massive, complicated, 12-nation trade agreement that would dictate trade norms across a wide range of industries.

Like most large international agreements, especially trade deals, TPP has been kept almost entirely hidden from the public, save for a few chapters acquired and published by WikiLeaks. Fast track  is designed to package the TPP—and any trade agreement in the near future—as an all-or-nothing deal, given that it would be nearly impossible to imagine Congress voting on the individual elements of such a sprawling document.

President Obama had urged members of his party to support TPA, but Senate Democrats bucked their party’s leader and vowed the morning before Tuesday’s vote to stand united against TPA.

“This is a big win against massive, secretive anti-user deals like TPP, but we need to remember that the fight isn’t over,” cautioned Maira Sutton, Global Policy Analyst at the Electronic Frontier Foundation. “Proponents of these backroom negotiations will be back with another bill to fast track the TPP—so it’s time to celebrate, but not at all the time to let our guard down.”