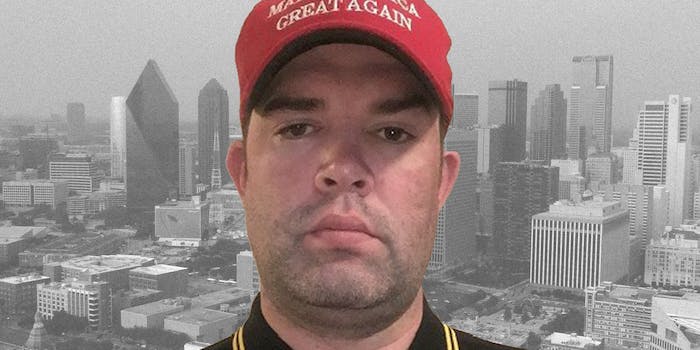 The alleged targets say they were never told.

These are just some of the bizarre details of the years-long feud between former Proud Boys attorney Jason Van Dyke, who was also a member of the group and briefly led it, and Thomas Retzlaff, the man who Van Dyke alleges is trying to destroy him.

Both men accuse the other of being fixated on him. Van Dyke has recently signaled he wants to end the conflict, and offered to drop his defamation lawsuit against Retzlaff—Retzlaff refuses. He told the Daily Dot that he is merely defending himself from litigation Van Dyke initiated, on which he has spent a significant sum.

Now new evidence in a Texas police file obtained by the Daily Dot reflects that Van Dyke threatened Retzlaff’s life a little more than a year ago.

According to the file, an informant recorded Van Dyke talking about a plan to kill or otherwise torment the man he blames for taking everything from him. Van Dyke declined the Daily Dot’s inquiry to speak, which he said he forwarded to his attorney.

Retzlaff said that he recalled Van Dyke’s name from media reports about him representing a client who sued one of these sites in 2014.

Later, when Van Dyke was offered a position as an assistant district attorney, Retzlaff said that he mentioned to a friend in the office that they should look into his history of racist remarks and online threats.

The next steps are easier to trace.

Van Dyke was offered a job as a Victoria County, Texas, assistant district attorney in 2017. Retzlaff admits suggesting to someone in the office, which is near one of his residences, that they look a little harder at their new hire. The job offer was rescinded after the DA’s office learned of Van Dyke’s involvement with the Proud Boys and history of threats and other bad behavior online.

A year later, in 2018, Van Dyke lost a second job in private practice when someone calling themselves Dean Anderson emailed the firm accusing him of being a “white supremacist/Nazi” and “threatening to MURDER people who get into disagreements with him,” reports the Dallas Observer. He blamed Retzlaff. Retzlaff denies this.

Van Dyke, in turn, sued Retzlaff in federal court, alleging defamation and seeking $100 million in damages, as well as a restraining order. Retzlaff provided the Daily Dot with a copy of the original complaint and Van Dyke’s most recently amended complaint, which was filed in January.

Retzlaff countersued under Texas’s anti-SLAPP (strategic lawsuit against public participation) statute, which is best known for protecting media companies from nuisance litigation by those who would silence them. The Fifth Circuit Court of Appeal decided against Retzlaff; coincidentally, soon thereafter, the Ninth Circuit Court of Appeal ruled in favor of the anti-SLAPP claim that President Donald Trump filed against Stormy Daniels.

Both cases considered whether Texas state law applied in federal court. Retzlaff’s team of attorneys is now appealing to the U.S. Supreme Court, which has granted it until earlier April to file. The case has attracted support from media companies and, Retzlaff says, Trump himself.

After the lawsuit was filed, the conflict escalated, according to a bar complaint, into what Retzlaff describes as repeated death threats and suggestions that he kill himself.

Based on this, Retzlaff filed a bar complaint against Van Dyke.

Retzlaff said that he actually agrees with most of what the Proud Boys stand for. The Proud Boys are a far-right extremist group that describes its views as Western chauvinism.

According to copies of emails in the Texas police file, on the morning of Dec. 12, 2018, in the heat of the conflict, Van Dyke allegedly emailed Retzlaff twice within two minutes. In the first email, he wrote, “I promise you this motherfucker: if my law career dies, you die with it.”

In the second Van Dyke wrote, “Go fuck yourself and what’s left of your miserable life. You have destroyed my life, and for that offense, you will pay with your own. That’s not a threat. That’s a PROMISE motherfucker.”

Both Retzlaff and his attorney in the anti-SLAPP suit independently provided copies of the police file to the Daily Dot.

In the first email, Van Dyke inexplicably copied attorneys with the Texas Bar who were looking into the complaint against him.

Weeks earlier, Van Dyke had been placed on a six-month suspension by the Texas Bar over another complaint. Based on Retzlaff’s complaint, the bar gave him an additional year-long punishment comprising three-months’ active suspension and nine months of probation, provided he complied with the terms of the punishment, which included fines and mental health treatment. That term ended on Feb. 29. According to Texas Bar records, Van Dyke is eligible to practice law.

In his most recently amended complaint against Retzlaff, Van Dyke claims that he is “no longer an attorney.” The document was filed during the term of his punishment.

The police in Oak Point, Texas, opened an investigation of Van Dyke based on his threats against Retzlaff. A grand jury opted not to indict Van Dyke for misdemeanor stalking, but Van Dyke may still be charged with felony obstruction or retaliation.

A county clerk of the court confirmed to the Daily Dot that there is a bond in the case, though charges have not been filed.

Retzlaff filed a Freedom of Information Act request for the police file. After months and an opinion from the Texas attorney general, on March 12, he received it. Both he and his attorney were shocked by what it contained.

According to the file, a friend and former roommate of Van Dyke’s provided the police with an audio recording of Van Dyke talking about plans to kill or terrorize Retzlaff. In the recording, which wasn’t in the file and neither Retzlaff nor his attorney have heard, Van Dyke allegedly claimed to have conducted surveillance on Retzlaff, both personally and via members of the Proud Boys, and said he’d spent a week crafting his plans.

“VANDYKE had two separate plans one of which ended in the death of Tom Retzlaff by VANDYKE and the other a series of acts which he believed would terrorize Retzlaff and two other victims,” the file states, “forcing them to live in fear of when he would show up.”

The file says that Van Dyke claimed to have Google Earth images of Retzlaff’s residence in Arizona and had given recent photos of Retzlaff to members of the Proud Boys Arizona Chapter, whom he had watching him.

“On the recording, [officers] heard VANDYKE say that Tom Retzlaff has a PO Box and there is a significant number of cameras where he could not set up and get a clean shot with a rifle at him,” the file continues. “VANDYKE also speaks of ‘taking out’ Retzlaff’s attorney and another individual VANDYKE called ‘the dentist.’”

Both Retzlaff and his attorney, Jeffrey Dorrell, were extremely disturbed to learn of this. They say that police never told them of the threat.

“I’m really pissed off that the police department didn’t warn me,” Retzlaff said. “And I’m very upset and disappointed.”

Dorrell told the Daily Dot that the specificity and planning evidenced in the police file were particularly alarming.

“To me, it’s one thing when you’ve got a kook who just makes an awful lot of grandiose death threats and as far as anybody knows has never carried them out,” Dorrell said. “It is another when he’s speaking from a yellow pad about it taking him a week to develop the plans for the assassination,” referring to a legal pad with notes seized by police.

Dorrell believes that it’s misguided for police to assume that Van Dyke’s history of making unfulfilled threats of violence—previous targets include an attorney with the Texas Bar, a blogger, and rapper Talib Kweli, none of whom has been harmed—means he won’t go through with it.

Dorrell pointed to the man who assassinated John Lennon, and the one who attempted to assassinate Ronald Reagan, as examples of people who were considered harmless “kooks” before their violent acts.

“They shouldn’t be lightly dismissing this as a kook making emailed threats,” Dorrell said.

As of press time, the Oak Point police had not responded to the Daily Dot’s questions, including whether they considered charging Van Dyke with another crime.

An acquaintance of Van Dyke’s said that he doesn’t believe the threat was serious. He characterized Van Dyke as having a bark that’s far mightier than his bite. The acquaintance, speaking on condition of anonymity because they didn’t want to be tangled up in the matter, said that Van Dyke makes hollow threats when he’s angry, which they believe is what happened here.

“When you’re super pissed you say dumb shit,” they said.

They couldn’t speak to Van Dyke’s alleged history of threatening others, but said he likes to be the center of attention, and that he’s really a “great guy” who “would do anything for anybody.”

Both appear to be committed to a fight, as their lawsuit reflects.

Some would say both are vexatious litigants. Retzlaff was reportedly named such by a Texas court in 2008 because of what the Denton Record-Chronicle described as “a history of filing frivolous litigation.”

Retzlaff explained that he’s a vexatious person, noting, “which is all the more reason not to sue me.” He claimed not to recall what precipitated him being labeled such.

Attorney and blogger Ken White, who has been the subject of Van Dyke’s focus, which allegedly included sending him a glitterbomb, has called Van Dyke a vexatious litigant.

Both men have had run-ins with the law as well. Retzlaff reportedly was in prison from 1998-2004 for carrying a prohibited weapon on elementary school grounds. Retzlaff said that there was a knife in his car; asked why he received an arguably lengthy prison sentence, he said, “This is Texas.”

In 2018, Van Dyke was charged with making a false police report in association with a claim that goods had been stolen from his truck. He was charged after a witness contested this. The trial was later canceled because the witness disappeared. Foul play was not suspected.

In media reports, the witness who seemingly vanished was only identified by his first name.

Van Dyke ultimately pled no contest but continued to deny the charges.

This bizarre saga is far from over. After receiving the police file, Retzlaff filed a new motion to dismiss Van Dyke’s defamation suit based on the “newly-discovered assassination plot.”

Van Dyke is better known for filing lawsuits than actual violence—and in fact, has not physically attacked any of his alleged targets—but both Retzlaff and his attorney Jeffrey Dorrell feel that they can’t ignore it.

“I don’t have any choice but to take something like that seriously,” said Dorrell.