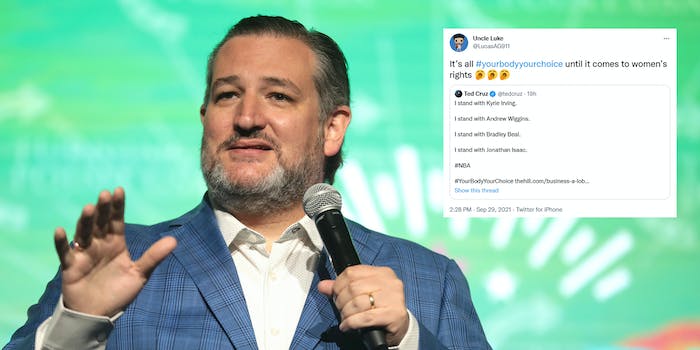 ‘Unless it comes to abortion, amirite?’: Ted Cruz criticized for using #YourBodyYourChoice hashtag

''Your body your choice' is quite the hashtag to go with as a senator from Texas.'

Sen. Ted Cruz (R-Texas), who consistently draws the ire of people online for his tweets, is once again drawing fierce criticism after he tweeted support for NBA players deciding not to get vaccinated by using the hashtag #YourBodyYourChoice.

People online were quick to point out the hypocrisy of Cruz using that hashtag because Texas recently passed a highly restrictive and widely condemned abortion ban.

Several NBA players have said they would not get the COVID-19 vaccine. A spokesperson for the NBA said that “any player who elects not to comply with local vaccination mandates will not be paid for games that he misses,” according to the Athletic.

Cruz—who has received the COVID vaccine—decided to weigh into the issue by tweeting his support for several NBA players.

Cruz’s use of the #YourBodyYourChoice hashtag sparked a ton of criticism. Texas’s abortion law bans abortions after six weeks of pregnancy and allows for private citizens to sue people who have abortions after that. The law has been widely condemned.

But Cruz supporting a “choice” for vaccines, but not doing the same for women’s rights sparked a ton of pushback online.

“It’s all #yourbodyyourchoice until it comes to women’s rights,” one person tweeted.

“Ted Cruz thinks anti-vax NBA players should be able to choose—but women in Texas—not so much,” another Twitter user added.

They were far from the only ones to weigh in on Cruz’s tweet.