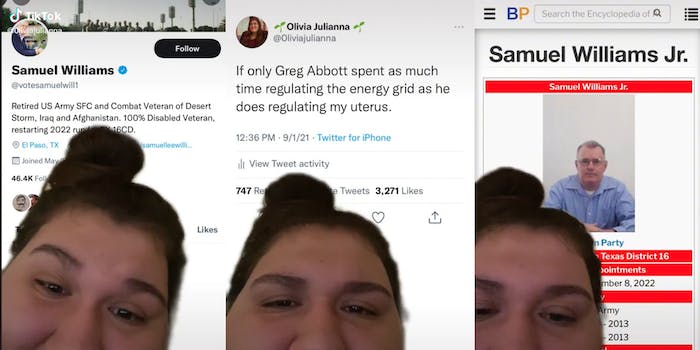 ‘You just got f*cking schooled by a teenager’: Texas Republican tries, fails to come for 18-year-old over abortion ban tweet

'Worry about your research, not about my uterus.'

An 18-year-old Texas woman is being applauded on Twitter after calling out a Republican congressional candidate who attempted to debate her over the state’s recent abortion ban.

“If only Greg Abbott spent as much time regulating the energy grid as he does regulating my uterus,” Julianna tweeted.

The tweet, which took aim at the ongoing energy issues that saw the state’s privately-run grid crumble during a devastating snow storm in February, quickly racked up thousands of likes.

Samuel Williams, a popular Twitter user and veteran who has declared his candidacy for Congress next year, responded shortly after in an attempt to dunk on Julianna. In the tweet he wrote “uniformed,” presumably meaning “uninformed.”

“Here we go again an uniformed liberal that would murder a child,” Williams wrote. “Blaming Greg Abbott for something he has no control over. She doesn’t seem to understand that the power grid is owned and operated by private companies.”

Julianna shot back even faster in a response tweet noting that the grid is also overseen by the Public Utility Commission of Texas where Abbott appoints members.

“Samuel I find it funny you want to run for a #txlege seat but you aren’t informed enough about the energy crisis to know that the Public utility commission that oversees ERCOT has a board that’s appointed by @GovAbbott worry about your research, not about my uterus,” Julianna said.

“Hey @votesamuelwill1 we heard the smack down you just got here in Oklahoma. You good brother?” another Twitter user said.

“Hey Sam, you just got fucking schooled by a teenager. Get him Olivia! Wish more people your age were as engaged as you are,” another person chimed in with.

The incident also went viral on TikTok where Julianna broke down her back-in-forth in a video that has since earned more than 60,000 views.

“Well, Samuel Williams, who has about 55,000 followers on Twitter and is running for a legitimate Congressional seat, decided that he didn’t like what I tweeted,” she says.

In a statement to the Daily Dot, Julianna said that Williams should have been more informed before making his remark.

“I’m sick of white men in Texas trying to delegitimize the education and struggle of women— especially women of color,” Julianna said. “If you’re going to run for a Congressional seat maybe make sure you’re informed enough about the people you want to represent that an 18-year-old freshmen in college doesn’t publicly embarrass you before you even start a legitimate political career.”

Although Julianna did experience a handful of negative comments after being quote-tweeted by Williams, she says the majority of users sided with her.