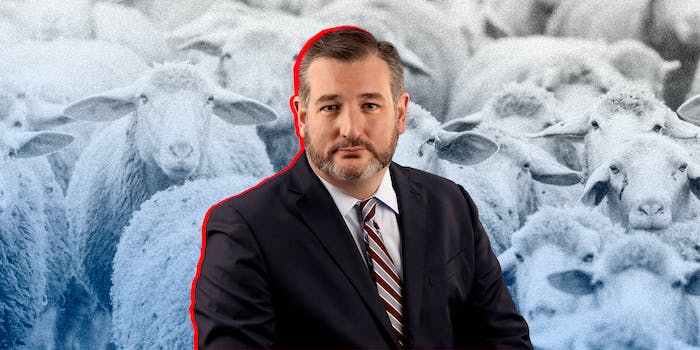 Everyone reminded Cruz of how he blindly supported Trump after he mocked his family.

During an interview with Fox News host Sean Hannity, Cruz accused his colleagues across the aisle of having a “herd mentality” regarding the Senate Majority Leader.

“And it’s a weird thing, Sean,” Cruz said. “There is a herd mentality among Congressional Democrats that they obey Chuck Schumer and their only answer is ‘Sir, yes sir.'”

Twitter users quickly began noting Cruz’s ongoing support for Trump despite the former president’s long and sordid history of attacking the senator and his family.

Not only did Trump previously accuse Cruz’s father of aiding in the assassination of former President John F. Kennedy, but the twice-impeached president even attacked the looks of senator’s wife.

“Hold up, is this coming from the guy who kissed the ass of the man who insulted his wife and father for over four years?” columnist David Weissman said. “Ted Cruz has no self-awareness.”

Others were less descriptive with their responses and instead expressed shock and bewilderment at Cruz’s remarks.

“You just can’t make this shit up anymore!” @TheGREATHoudin2 wrote.

Many also mentioned the controversy involving Cruz from last February when the senator attempted to flee to Mexico as his constituents were facing an unprecedented snow storm.

“Get me on air with so I can cuss him ALL the way out for leaving us to die here in February, due to HIS HERD MENTALITY,” @Tinu said. “I AINT FORGET GUY. One day you will face what you’ve done.”

Interestingly, Cruz even retweeted the video clip himself, seemingly unaware of how it could be viewed as highly hypocritical. Since then, the senator has not weighed in further on the matter.