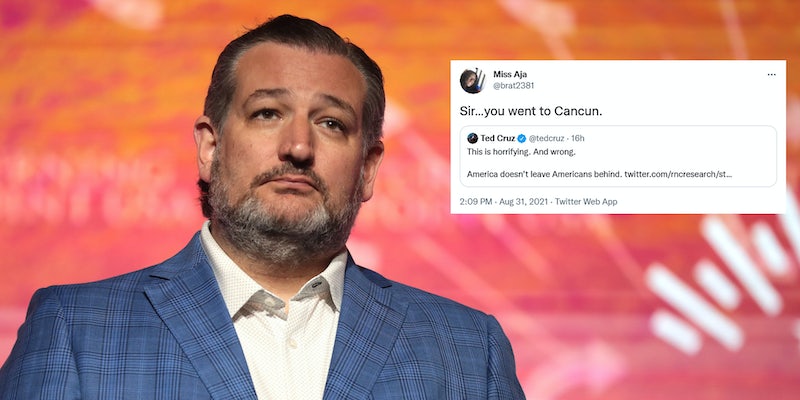 Sen. Ted Cruz (R-Texas) attempted to criticize the handling of the U.S. withdrawal from Afghanistan by saying that “America doesn’t leave Americans behind.” For that, he was quickly reminded of how he fled for Cancun during a weather emergency in his state.

Cruz quote tweeted a video from CNN that was shared by the Republican National Committee late on Monday night. In the video, a reporter speaks about a Texas family who had “been going to the airport for two weeks” trying to get out of the country.

In response to the video, Cruz tweeted: “This is horrifying. And wrong. America doesn’t leave Americans behind.”

The Texas senator was immediately mocked for the tweet, with people online bringing up his trip to Cancun during a massive winter storm in Texas earlier this year.

Amid the backlash he received after being spotted in an airport on the way to Cancun, Cruz released a statement saying that he was accompanying his children for a trip they were taking with their friends.

All of this was brought up again in the wake of Cruz’s tweet on Monday night, with “Cancun” trending on Twitter.

“Bold words from a man who left all the Americans in his state behind to vacation in Cancun,” another user added.

“Unless it’s cold and your kids really want to get tan,” another Twitter user wrote.

Many other people online jumped in to mock the senator.

It’s been a rough day online for Cruz, who also incorrectly claimed the Taliban hung a person from a U.S. helicopter.