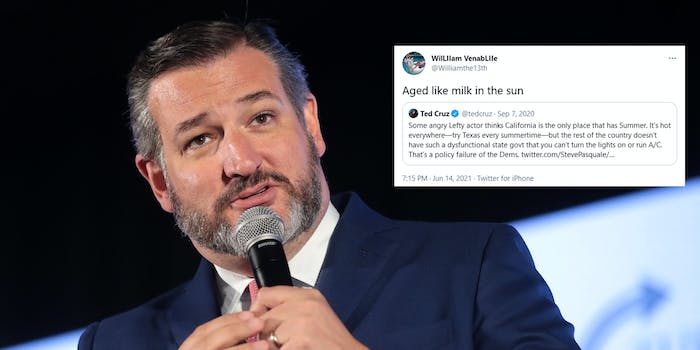 Maybe Cruz shouldn't tweet about other states having energy problems.

As Texas faces yet another energy crisis this year, old tweets from Sen. Ted Cruz (R-Texas) mocking California’s “dysfunctional” policies surrounding power conservation are coming back to haunt him.

Texas is dealing with a heatwave this week, and the Texas organization that operates the state’s power grid is urging people in the state to conserve energy.

Specifically, in its request, the state called our air-conditioning use.

“Set your thermostat to 78 degrees or higher—every degree of cooling increases your energy use by six to eight percent,” the company wrote.

The same organization, the Electric Reliability Council of Texas (ERCOT), also faced criticism for the power failure earlier this year during a massive winter storm in the state (during which Cruz fled for Cancun before heading back).

But as Texas deals with its latest energy crisis, old tweets from Cruz that criticized the energy conservation efforts of California last year are resurfacing online.

Last September, Cruz mocked California’s “dysfunctional” government for not allowing residents to “turn the lights on or run A/C” during a heatwave. Exactly what Texas is doing this week. Cruz boasted that Texas could handle heat just fine.

“Some angry Lefty actor thinks California is the only place that has Summer. It’s hot everywhere—try Texas every summertime—but the rest of the country doesn’t have such a dysfunctional state govt that you can’t turn the lights on or run A/C. That’s a policy failure of the Dems,” Cruz tweeted.

Of course, given that the organization that is running Texas’s power grid is now doing the exact same thing, people online thought that Cruz’s tweet had “aged like milk in the sun.”

“I love how this isn’t even a year old and it’s come back to haunt him twice now,” one Twitter user wrote.

“This aged about as well as you can expect,” another user added.

In response, Cruz said he had “no defense” for them.