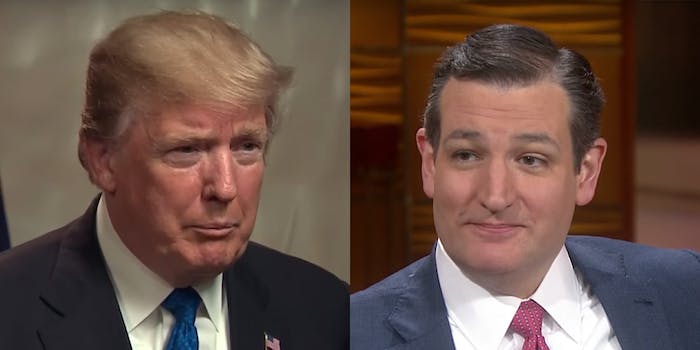 The frenemies will appear together at a rally in Houston.

An old photo of President Donald Trump shaking hands with Sen. Ted Cruz (R-Texas) is making the rounds—and being mocked—as the senator and the president prepare for Monday night’s rally together and gloss over the animosity that has long defined their relationship.

Trump infamously lobbed insults against Cruz and his family during their 2016 campaigns. In addition to frequently called Cruz “Lyin’ Ted,” Trump bad-mouthed Cruz’s wife and suggested Cruz’s father was involved in the assassination of President John F. Kennedy. Cruz, in response, once called Trump a “sniveling coward.”

“Cruz has basically bended the knee and submitted to Trump’s authority,” Green said. “And in return he’s being rewarded with a trip that will presumably help him gin up Republican enthusiasm.”

In its report on the subject, Newsweek on Monday tweeted a photo taken last year at a flood relief center for hurricane survivors in Houston. The visual of Cruz slightly bowing his head as he shakes Trump’s hand struck many as an apt metaphor for Cruz’s acceptance of Trump’s support. It invited plenty more mockery.

How do you emasculate a man with no balls? https://t.co/T0CK72GqLA

“Thanks for nicknaming me Lyin Ted and calling my wife ugly and saying my dad helped kill JFK, sir. Did I mention I’m tough as Texas?” pic.twitter.com/OH8EsRBfxN

Trump and Cruz will appear together Monday night at a rally at Houston’s Toyota Center ahead of the senator’s tight reelection race against Beto O’Rourke.