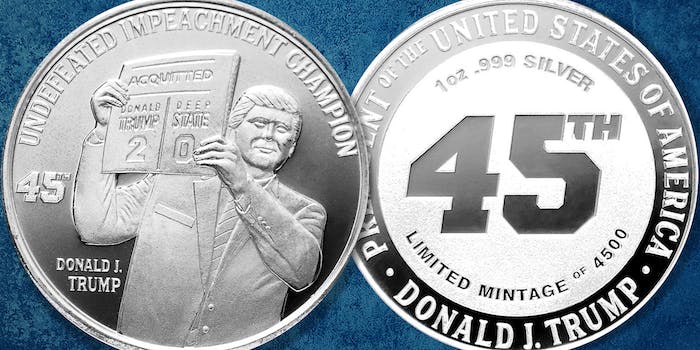 The coin commemorates 'the first president to be impeached twice.'

Supporters of Donald Trump are promoting a collectible coin that celebrates the former president’s two impeachments.

The Gateway Pundit, a conspiratorial blog popular among the far-right, published a sponsored article on Sunday asking users to pre-order “The Impeachment Champion 1oz Silver Round.”

Produced by the South Carolina-based Disme Coin Company, the silver round sells for $47.45 and will be limited to 4,500 pieces. A description of the coin attempts to paint the president’s two impeachments as some sort of unprecedented victories.

Although the coin is only available for pre-order, more than a dozen five-star reviews have already been left for the item.

“I treasure all these coins cause the story on each of them represents these precious moment [sic] which will be historic for the future generation and will be worth the collections!” one review says.

The Disme Coin Company also sells numerous silver rounds related to the QAnon conspiracy theory and even a coin celebrating the Jan. 6 riot at the Capitol.

Aside from the Gateway Pundit, the Disme Coin Company has promoted its products to other far-right outlets, including Right Side Broadcasting.