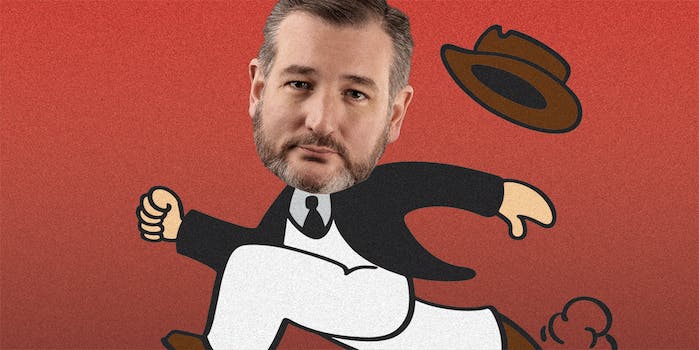 Sen. Ted Cruz (R-Texas) is being roasted online after condemning Democrats for leaving the state, with people online reminding him of his own infamous trip to Cancún amid a winter storm.

Numerous Democrats flew out of Texas on Monday in order to deny Republicans a vote on a controversial election bill.

Cruz called the move a “political stunt” and argued that Democrats’ opposition to voter ID laws was “ironic” given that they likely had to show ID when boarding their flights.

“The Texas Democrats who have pulled this political stunt by flying to Washington, D.C. almost surely had to show ID to get on their jet, yet they’re throwing a fit because they don’t want basic election integrity steps strengthened in Texas,” Cruz tweeted.

But the true irony for many on Twitter was Cruz’s criticism, since the lawmaker had fled to Mexico during the historic Texas snowstorm.

Rep. Hank Johnson (D-Georgia) also weighed in by making mention of Cruz leaving his constituents in the dark during the snowstorm.

“If it’s one thing @tedcruz knows about, it’s jet setting,” Johnson tweeted. “Reminds you of when he abandoned his duty to the people of Texas when he left in the middle of a winter storm to go to Cancun.”

The politician’s replies were also flooded with references to his attempted Cancún vacation, which he blamed on his children at the time, as well as pushback on his entire argument.

“You have a Constitutional right to vote, you don’t have one to fly,” @rodgers1125 said.

The squabble over voting legislation ultimately led Republican Gov. Greg Abbott to threaten to arrest the Democrats who left the state upon their return.