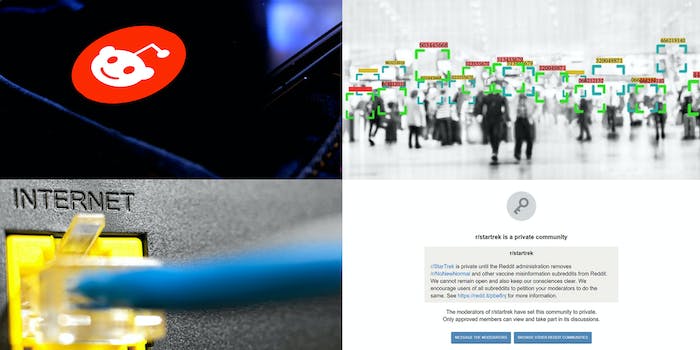 Last week, more than 1,000 subreddits posted a plea for Reddit to crack down on COVID-19 disinformation. The company refused.

Now dozens of subreddit have gone private in protest. More are planning to do the same later this week.

As the Daily Dot reported last week, the VaxxHappened subreddit posted a lengthy statement urging Reddit to do more to purge the platform of false information concerning vaccines, masks, and the virus.

“There needs to be a more active involvement in preventing the spread of the disinformation that is keeping us within a pandemic that at this point is entirely manageable,” they wrote. “The main problem with a concerted disinformation campaign is that such a message attains an air of legitimacy through sheer volume of repetition.”

In a response posted by Chief Executive Officer Steve Huffman, who goes by spez on the platform, the company insisted that it believes in vaccines and masks and said that it provides reliable COVID-related resources to assist administrators, moderators, and users. But it largely prefers to allow users to hash it out on their own, Huffman wrote.

VaxxHappened and those sympathetic to their cause were disappointed by this response.

“[It] felt like either a giant middle finger, or a delaying tactic to try to get us to forget about it,” one of the organizers told the Daily Dot on its Discord channel.

Organizers also began discussing plans for a massive campaign to set their subreddits to private in protest.

Though the current plan is to go private en masse on Thursday, dozens have already done so. A redditor is keeping a running tally of those that have gone private to plan to do so. As of this writing, nearly 40 are on the list, with more expected.

Forget Roku and Fire Stick, the Chromecast with Google TV might be the best streaming device.

Most people know Roku and Firestick, but Google’s Chromecast just got an update that’s brought it into the big leagues.

Learn all about this incredible, inexpensive, 4K streaming wonder with our handy guide. Learn about how it groups shows, its incredible search, and lightning-fast speed. Chromecast is making a good argument that it’s the best device on the market.

Numerous agencies in the federal government are planning to expand their use of facial recognition technology in the future, despite concerns that have been raised about its racial bias and surveillance implications.

The Government Accountability Office (GAO) released a report earlier this week that highlighted how 10 agencies in the federal government told them that they planned to grow their use of facial recognition technology by 2023.

Specifically, the report notes that those 10 agencies plan to use “new” facial recognition systems by 2023.

The report comes as widespread concerns have been raised about facial recognition, particularly its use by law enforcement and the government.

Five million people across the United States have enrolled in the Federal Communications Commission’s (FCC) Emergency Broadband Benefit program since it launched, the agency announced.

The Emergency Broadband Benefit is a coronavirus pandemic-related program that offers people a discount on monthly internet bills. The discount is $50 per household and $75 for Tribal lands. The benefit can also be used to buy devices that allow people to get online.

The program, which had some complaints from everyday users about participating internet service providers early on, is directed toward Americans who need it most. Being enrolled in SNAP, Medicaid, Lifeline, or having a child enrolled in a reduced-price meal program at school are just some of the qualifications needed to apply.

The announcement from the FCC on Friday means that 1 million people enrolled in the program over the last month.