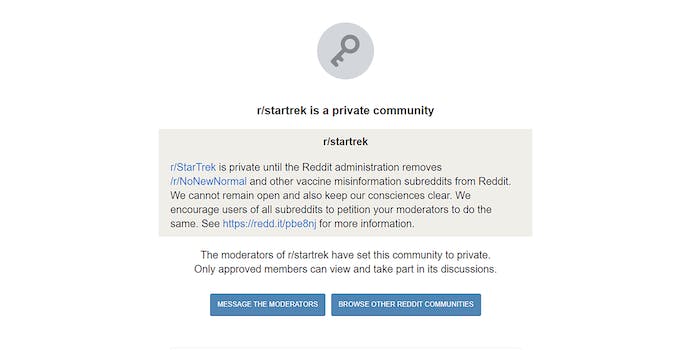 Protest follows a mass, unheeded plea for Reddit to ban those who spread false information about the virus.

Last week, more than 1,000 subreddits posted a plea for Reddit to crack down on COVID-19 disinformation. The company refused. Now dozens of subreddits have gone private in protest. More are planning to do the same later this week.

As the Daily Dot reported last week, the VaxxHappened subreddit posted a lengthy statement urging Reddit to do more to purge the platform of false information concerning vaccines, masks, and the virus. The statement claimed that, in spite of Reddit’s promises, “nothing of substance has been done aside from quarantining a medium-sized subreddit [No New Normal], which barely reduces traffic and does little to stop misinformation.”

“There needs to be a more active involvement in preventing the spread of the disinformation that is keeping us within a pandemic that at this point is entirely manageable,” they wrote. “The main problem with a concerted disinformation campaign is that such a message attains an air of legitimacy through sheer volume of repetition.”

In a response posted by Chief Executive Officer Steve Huffman, who goes by spez on the platform, the company insisted that it believes in vaccines and masks and said that it provides reliable COVID-related resources to assist administrators, moderators, and users. But it largely prefers to allow users to hash it out on their own, Huffman wrote.

“Reddit is a place for open and authentic discussion and debate,” he said.

“…When it comes to COVID-19 specifically, what we know and what are the current best practices from authoritative sources, like the CDC, evolve continuously with new learnings. Given the rapid state of change, we believe it is best to enable communities to engage in debate and dissent, and for us to link to the CDC wherever appropriate. “

VaxxHappened and those sympathetic to their cause were disappointed by this response. “[It] felt like either a giant middle finger, or a delaying tactic to try to get us to forget about it,” one of the organizers told the Daily Dot on its Discord channel.

“This statement from the admins is hypocritical, dishonest, and misrepresentative of the situation on their site,” they wrote. “They are portraying the misinformation as simply discussion that criticizes the majority opinion, when it is far more than that: It is discussion that actively advises against government guidelines, opting to follow disproven studies and anecdotal evidence.”

Organizers also began discussing plans for a massive campaign to set their subreddits to private in protest.

Though the current plan is to go private en masse on Thursday, dozens have already done so. A redditor is keeping a running tally of those that have gone private or plan to do so. As of this writing, nearly 40 are on the list, with more expected.

Those that have gone private to protest Reddit’s alleged inaction represent a diverse cross-section of subreddits ranging from WhatIfFiction to PokemonGo to Florida. Several subreddits dedicated to Star Trek are participating.

All now have static landing pages containing statements that they’ve done so to protest Reddit’s inaction on COVID misinformation.

“We cannot remain open and also keep our consciences clear,” the StarTrek subreddit’s statement reads. “We encourage users of all subreddits to petition your moderators to do the same.”

All ask the platform to ban subreddits that circulate COVID disinformation. Most specifically call out NoNewNormal.

In response to complaints that NoNewNormal circulates lies about the virus, masks, and vaccines, Reddit quarantined it earlier this month. Quarantined subreddits include warnings and don’t generate revenue or appear in public searches. It’s essentially the last step before they’re banned.

The campaigners view NoNewNormal’s quarantining as a half-measure at best. They want it banned and complain that other subreddits that share significant amounts of false information haven’t faced sufficient enforcement.

In response to the latest protest, Reddit offered nearly the same statement it had about last week’s campaign to get it to crack down on COVID misinformation.

“Reddit is a place for open and authentic discussion and debate. This includes conversations that question or disagree with popular consensus,” a company spokesperson told the Daily Dot via email. “We will continue to action content and users that violate our policies, and provide users with authoritative resources when viewing communities that may warrant additional scrutiny.”

The spokesperson also pointed to resources it has offered to direct people to trustworthy information about COVID, such as banners on the homepage directing people to the Centers for Disease Control and Prevention and the Coronavirus subreddit and an “Ask Me Anything” series featuring experts in the field.

Ivermectin is an anti-parasitic drug mostly used for animals. It’s not approved to treat COVID and there’s little evidence of its efficacy. Nevertheless, rumors that Ivermectin cures the virus have caused a surge in demand for the drug, with some ingesting enormous quantities procured from farm supply stores, resulting in a significant increase in calls to poison control hotlines and even hospitalizations. Ivermectin overdose can cause symptoms ranging from diarrhea to seizures and death, according to the Food & Drug Administration.

This is the second time this year that subreddits have gone private to protest Reddit’s actions. In March, dozens of popular subs went dark overnight to urge the company to get rid of an employee they described as a pedophile “enabler.” The campaign was ultimately successful.

VaxxHappened and its allies are hoping that their efforts are similarly rewarded.