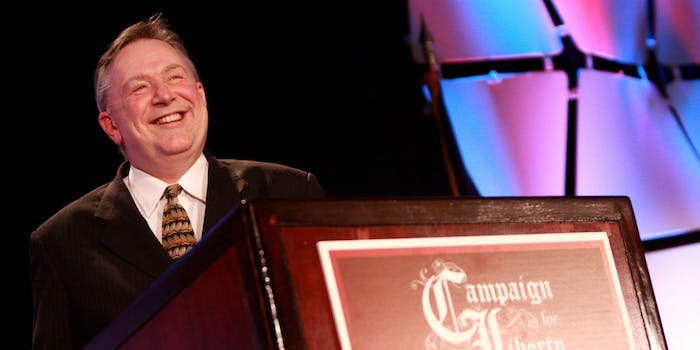 His burns are so hot you can't even touch them.

The conservative congressman from Texas’ 36th district has delighted/appalled followers with tweets comparing Central American migrants to Elian Gonzalez, suggesting that American children be sent from cities with high murder rates to Guatemala, and highlighting the hypocrisy of liberal cities that refuse to accept migrants awaiting immigration hearings.

And those are just his tweets about the border crisis that’s currently dominating the headlines.

Stockman’s tweets run the gamut from rants about people who oppose the Supreme Court’s Hobby Lobby ruling to pointed comparisons between liberals and toddlers. But what really caught our attention was his zingers. Stockman must have a professional comedian on his staff, because his jabs are so good that they often resemble a conservative version of The Daily Show.

Here is an example of the slams that regularly appear on Stockman’s Twitter feed:

Obama stays skinny by constantly running from his own statements.

Obama spent the day drinking beer and shooting pool. So the President couldn’t visit the border for the same reason people flunk college?

That last one wasn’t even the only salvo Stockman fired off on July 10, a day when the president endured a fresh round of conservative hate for playing golf instead of staging a photo-op at the Mexican border. The Texas congressman sunk a comedic hole-in-one when he suggested a new strategy for demanding accountability from the president:

It appears the only way we’ll get Obama to visit the border is to put a golf course there.

Galileo dropped a one-pound and a one hundred-pound ball from the Tower of Pisa. Hillary’s book sales hit bottom first.

And here’s Stockman’s response to a tweet from the liberal organ Democracy Now!:

If congressional Democrats believe the President can act as his own personal Congress, they’re all free to resign their seats and go home.

Lest you think that Stockman’s tweets are simply for his followers’ amusement, know that he’s serious about the dangers posed by those he mocks. He’s particularly concerned about the long-term consequences of President Obama’s so-called “pen and phone” strategy, which involves signing executive orders and coordinating public-private partnerships. Where some might see a constrained approach to governing necessitated by the political headwinds, Stockman sees the stirrings of tyranny masked by a humanitarian beverage.

“I have a phone and a pen” quickly becomes “I have a boot and a club.” Liberalism is just fascism holding a cup of fair trade latte.

His comedic chops are so strong that he even found a way to savage one of the most cherished comics of the past few decades.

Makes perfect sense Archie is liberal. Both were last relevant in the ’70s

Stockman’s political views may not be your cup of tea, but no one can deny that he’s on top of his game when it comes to conservative Twitter comedy.

IRS claims “glitch” erased all incriminating Lerner emails. Sounds familiar. So I asked NSA to give me their copies. pic.twitter.com/rllfgugwkV