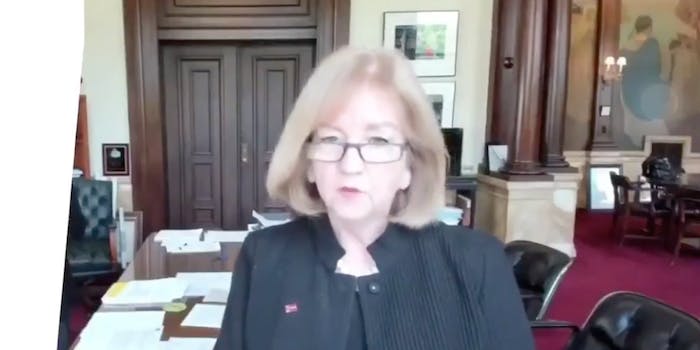 St. Louis Mayor Lyda Krewson is under fire after doxing several of her constituents this week.

During a Facebook live stream on Friday, Krewson revealed the personal information of community members who had petitioned her to defund the police.

Krewson read aloud not only full names but the addresses of individuals who had reached out to her office.

The action led to an immediate backlash, with many arguing that the mayor had endangered certain St. Louis residents.

The video, which was eventually taken down, stirred backlash among protesters as well as city officials and the ACLU of Missouri.

“Today adds to the list of things we never thought we would have to say. To be clear, it is shocking and misguided for Mayor Lyda Krewson of St. Louis, to broadcast the addresses of those who date to express a different viewpoint on an issue of public concern,” said Sara Baker, ACLU of Missouri’s Policy Director. “It serves no apparent purpose beyond intimidation We are stronger when we foster open dialogue. The chilling of debate should bother everyone, no matter whether they agree or disagree with the mayor on this particular issue.”

In an apology over the incident, Krewson stated that she merely was attempting to be “transparent.”

“In an effort to be transparent and accessible to the public during the Covid-19 pandemic, for more than three months now I have been doing tri-weekly community updates on Facebook,” Krewson said. “Tonight, I would like to apologize for identifying individuals who presented letters to me at City Hall as I was answering a routine question during one of my updates earlier today. While this is public information, I did not intend to cause distress or harm to anyone. The post has been removed.”

As noted by Heavy, although the letters can be obtained under the Freedom of Information Act (FOIA), those requesting such records would already have to know the identifying information of the letters’ authors.

Krewson’s apology did little to quell anger from protesters. A petition demanding the mayor’s resignation has since garnered more than 20,000 signatures. The petition criticizes the mayor’s actions and her support of increasing police funding.

That’s not the only action being taken by protesters. Krewson’s address and personal information has likewise been posted online. Although protesters marched to City Hall to confront the politician, it appears Krewson won’t be voluntarily vacating her role anytime soon.