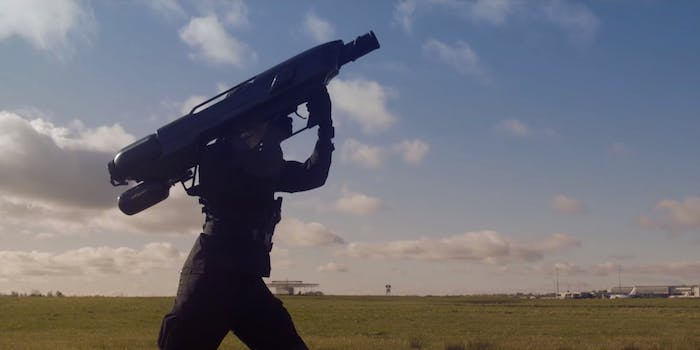 The skies are becoming more populated with drones every day, and people are looking for ways to take the blue yonder back from the machines. The answer may be the net-shooting SkyWall 100.

Developed by the United Kingdom-based OpenWorks Engineering, the SkyWall 100 is a shoulder-mounted bazooka that makes it easy to target and capture drones as they zoom by overhead.

Using an intelligent tracking system that it calls the “smart scope,” the device tracks drone movement and calculates its likely path. Using lateral and horizontal adjustments to account for range and trajectory, the smart scope lines up the shot for the user to fire.

Once the trigger is pulled, a canister containing a containment net is launched at the drone. The canister opens and the net blankets the drone, which can be taken down from over 100 yards away. A parachute is then deployed to bring the drone safely to the ground or, in the case of a missed shot, ensure the net and canister can be reassembled for additional uses.

OpenWorks refers to the SkyWall 100 as a “highly mobile” defense system, which is technically true. It’s mobile in the same way a tuba is mobile—you can carry it around, but it’s not exactly convenient to do so.

Other versions of the product, the SkyWall 200 and 300, are considerably less portable by design. The SkyWall 200 is held on a tripod to create a semi-permanent structure that can reach a greater range than the shoulder-mounted model. The 300 is a turret-style installation that is meant to be operated remotely.

For the time being, none of the SkyWall family have a price tag. OpenWorks says the defense systems will be available later this year for anyone who feels the need to defend themselves from the impending drone menace with a more high-tech solution than the Dutch police’s anti-drone eagles.