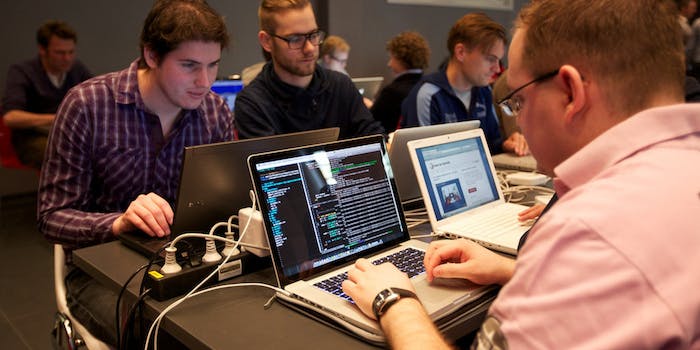 Techies are trying to one up each other with Tinder hacks

No Tinder account is safe from the hacking these techies have wrought.

Silicon Valley techies have found a way to incorporate their two favorite pastimes: hacking and hookups. Sound completely and entirely implausible? How could these bastions of both technology and chivalry ever use their talents for less than godly pursuits?

Sadly, it’s all true. In a post titled, “Hacking Tinder for Fun and Profit,” former Microsoft developer Yuri de Souza details the finer coding points of how he hacked the swipe-based dating app.

I played around with Tinder one lazy Sunday afternoon and recalled my friend telling me how he would spend hours swiping right on Tinder just to accumulate as many matches as possible. This had me thinking, why can’t I reverse engineer Tinder and automate the swipes? After all, I’m pretty darn good at taking things apart!

As ValleyWag reported, de Souz posted his Tinder magnum opus to Hacker News, so that the sentient neckbeards who inhabit the forum could “use the knowledge you gained in this article for good or evil.” But what de Souz started wasn’t a mass auto-swiping spree, but rather a game of techie one-upsmanship. Because if hackers are going to meet girls without lifting a finger, they want to do it on their own coding terms.

Perhaps the most cringeworthy of all the hacking submissions was one submitted by dx4100 called loltinder. The developer cited that the hack “exhausted me from 9 dates in a row. With some modification, this can easily message all girls. Use at your own risk.” His motivation? “I really just love meeting up with girls and reading bibles together. It’s so peaceful and sweet. Sex? Ew,” he wrote.

Ladies, if you didn’t heed the warning back in early July, when the Daily Dot dove into Tinder hacking, take these bone-chilling dispatches from Hacker News to heart. Delete the app before these guys find some hack that lets them crawl through your iPhone and bore you to death by talking about their next startup idea.