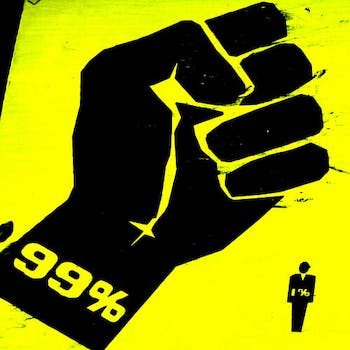 One vocal Marine in Times Square over the weekend found the courage to stand his ground and tell the N.Y.P.D. officers rounding up protesters, "There is no honor in this." His message has resonated far beyond 42nd street in the days since.

Sgt Thomas, who served two tours in Iraq, made the Internet rounds on Sunday with his video-taped impassioned plea to the NYPD, following Occupy Wall Street’s march into Times Square in New York City.

The NYPD, usually aggressive, clearly don’t know how to react to Sgt Thomas. Many just stand and listen, as Sgt Thomas shouts: “This is not a war zone, these are unarmed people.”

“They don’t have guns” he screams, “there is no honor in this!”

On Monday, Sgt Thomas’ video was picked up by various media outlets, and that evening, he appeared on Countdown with Keith Olbermann to discuss his political views and the Occupy Wall Street movement.

Many Occupy Wall Street protesters have uploaded “impassioned speech” videos before, but Sgt Thomas, who is a black soldier, seems to have struck a nerve.

Many Occupy Wall Street protesters have demanded an end to the war, and recent groups have joined OWS, like Occupy The Hood, in an attempt to diversify the movement. While other military groups have joined OWS (like Iraqi Veterans Against the War), Sgt Thomas has been the highest profiled case.

He also has a Facebook page, with just under 2,500 likes.

Chris Savvinidis, a Ron Paul supporter and libertarian, became well known earlier this month for his “End the Fed” speech, and went on to appear on Fox’s “Freedom Watch.”