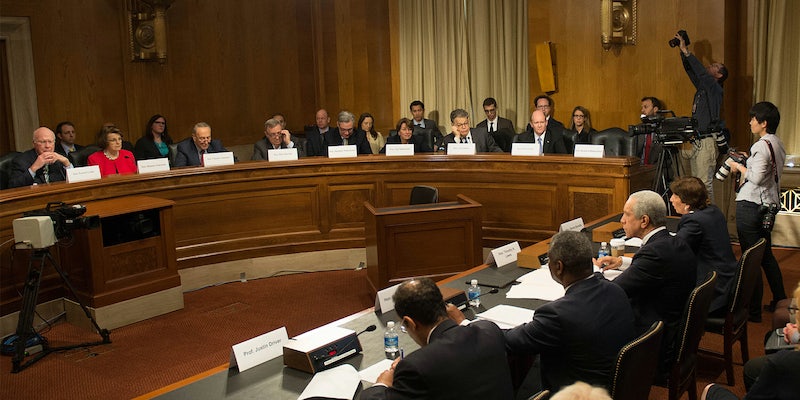 What every American should know about the Senate Judiciary Committee

This is one of the most important committees in Congress.

What is the Senate Judiciary Committee?

The Senate Judiciary Committee is one of the most powerful committees in Congress and is tasked with everything from vetting Supreme Court nominees and federal judges to drafting new laws on internet freedom and privacy. The 20-member panel plays a vital role in how the justice system shapes our lives. The Senate Judiciary Committee—likely due to its lofty role of sculpting the political makeup of the federal judiciary as well as probing Russia’s interference in the 2016 election—is also the site of some of the most heated and partisan squabbles in Congress.

Chaired by Sen. Chuck Grassley (R-Iowa) and Ranking Member Diane Feinstein (D-Calif), the panel’s roster includes some of the most powerful and senior members of the Senate.

Sens. Ted Cruz (R-Texas) and Lindsay Graham (R-S.C.)—both of whom ran against President Donald Trump for the 2016 Republican presidential nomination and are among the president’s biggest foes in his own party—are on the panel. Trump supporters Sens. John Cornyn (R-Texas) and John Kennedy Jr. (R-La.) are also on the Senate Judiciary Committee. Some of the most vocal critics of Trump in the Senate are among the panel’s Democratic members, including Sens. Al Franken (D-Minn.), Amy Klobuchar (D-Minn.), and Dick Durbin (D-Ill.).

Nominees fill out an exhaustive questionnaire of career milestones and past cases that makes any job application you’ve ever filled out look like a breeze. Nominees for the Supreme Court and any executive-level position (such as attorney general or Department of Homeland Security secretary), as well as judicial nominees for high-profile circuit and district courts, must testify before the Senate Judiciary Committee in confirmation hearings.

It’s no surprise that Democratic presidents pick liberal judges, and Republican presidents pick conservative judges. When the Senate majority and the president are in opposing parties, this can get ugly. Senate Republicans blocked former President Barack Obama’s judicial nominees, as well as Supreme Court nominee Merrick Garland when they took control in 2015. Trump—who will inherit twice the number of judicial nominees as Obama—has the power to completely reshape the federal judiciary over the next four years, especially if Republicans keep control of the Senate.

Senate Democrats have already grilled Trump nominees on their opposition to Roe v. Wade, their religious beliefs, and their alliance with far-right groups in Washington.

Regardless, whoever Trump nominates to these key positions in America’s judicial system, they’ll need to face the Senate Judiciary Committee first.

The Senate Judiciary Committee plays a major role in U.S. oversight of the internet. The panel has crafted laws on what liberties internet service providers (ISPs) and third parties can take with your personal data online. The panel also handles rules for how the government can examine your online content.

The Senate Judiciary is also in charge of reforms to the Foreign Intelligence Surveillance Act, or FISA, which allows for the collection of internet data of foreign citizens. Section 702, the controversial provision that allows the U.S. government to collect data on people outside the country for intelligence purposes, is set to expire at the end of 2017.

Many Republicans and Democrats on the panel claim to be pro-privacy, but there are plenty of exceptions—especially when government surveillance is involved.

Grassley has tried to push legislation that allows the government to access any documents you have stored on the cloud without a warrant. Feinstein has backed bills that would allow the courts to order companies to decrypt the devices of suspects in criminal investigations. As chairman of the Senate Judiciary Committee’s Subcommittee on Oversight, Agency Action, Federal Rights and Federal Courts, Cruz tried (and failed) to keep U.S. control over ICANN, the group that issues top-level domains like .com and .org.

Another hot-ticket item on the Senate Judiciary Committee’s agenda for 2017 is investigating Russia’s role in interfering with the 2016 election. The panel is probing for more information on the Russian lobbyist who met with members of Trump’s team during the 2016 election, as well as the FBI’s role in the Russia investigation. One of the co-founders of Fusion GPS—the company that compiled the infamous dossier on the Trump campaign—also recently testified before Senate Judiciary Committee.

As if Senate Judiciary Committee doesn’t already have enough on its plate… The panel will likely be among the first to review reforms to the Deferred Action for Childhood Arrivals (DACA) program, which the Trump administration announced would end in March 2018 without congressional action. Its first hearing on immigration reform is scheduled for mid-September.

Senate Judiciary also handles oversight of the FBI—a complicated role given President Trump’s distrust of the institution and its role in the Russia investigation. And dealing with patent trolls and intellectual property law is also on the panel’s agenda.

Finally, Senate Judiciary Committee is in charge of criminal justice reform. Grassley is set on revising sentencing laws and reforming prisons this year. In the wake of unrest in Charlottesville, Virginia, and the targeting of Jews, Muslims, and other minorities by white supremacist and far-right groups since Trump’s election, Senate Judiciary will also look at changes to federal hate crime laws.