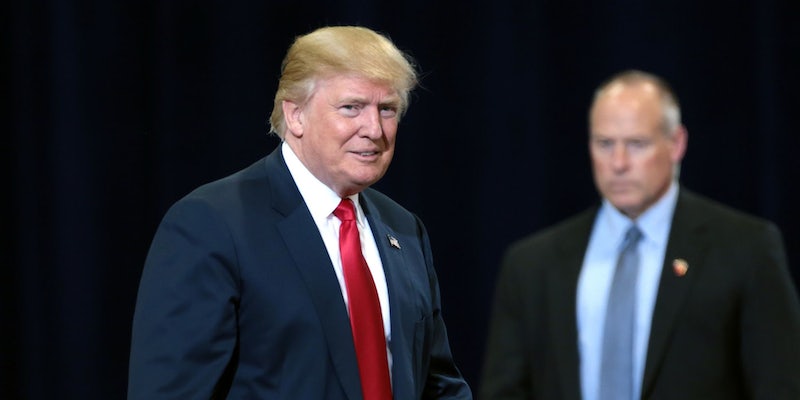 It includes the phrase 'golden shower.'

A secret bundle of files containing uncorroborated allegations about how the Russian government possesses blackmail-worthy information about President-elect Donald Trump is now public, thanks to BuzzFeed News.

The documents, which have been circulating among reporters for weeks, have not been released by any other news outlets because they are wholly unverified, allegedly the work of a former British intelligence operative. The documents were shared with both the president-elect and President Barack Obama last week, according to CNN, which vaguely discussed the contents of the dossier in a front-page story and on air Tuesday afternoon.

Among the more explosive, unverified allegations is that, during his campaign, Trump surrogates regularly exchanged information with intermediaries for the Russian government. The papers also contain a number of graphic details about sexual acts involving Trump, including one particularly controversial act, said to have taken place at the Ritz Carlton Hotel in Moscow, that involves urine and prostitutes.

BuzzFeed said it released the documents because it wanted the American people to “make up their own minds about the allegations,” which it noted have been circulating “at the highest levels of the U.S. government.”

Ben Smith, BuzzFeed’s editor-in-chief, explained the decision to publish the report (which the Daily Dot has decided to not republish), to members of the publication’s staff:

Here's the note I sent to @buzzfeednews staff this evening pic.twitter.com/OcAloWzVzb

In its report, CNN said one reason Trump was apprised of the dossier’s existence was because the nation’s intelligence chiefs knew the allegations were “circulating among intelligence agencies, senior members of Congress and other government officials in Washington.”

Update 7:23pm CT, Jan. 10: Trump tweeted what appears to be his response to the report, which he called “fake news” and a “total political witch hunt”: