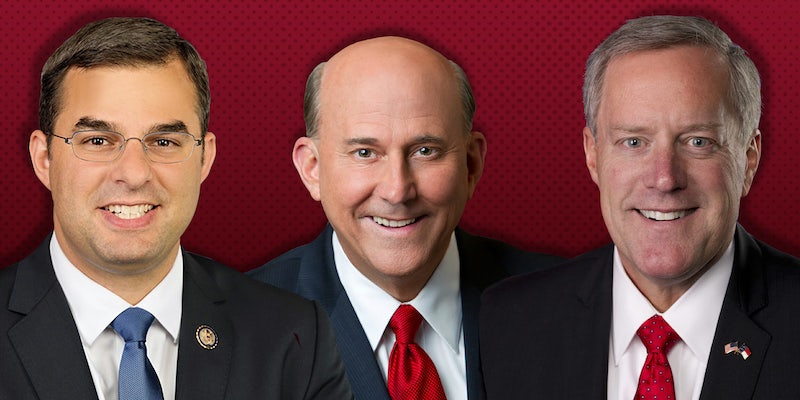 10 important things to know about the House Freedom Caucus

The defiant actions of the House Freedom Caucus have frustrated President Donald Trump so much during his first 100 days in office that he has already vowed to “fight them” in the 2018 midterm elections. The small and unruly band of far-right conservatives, who have been branded “un-American” and dismissed as extremists by the media, leverage a powerful position within Congress. They represent a serious challenge to establishment Republicanism and the Trump administration, but who are the House Freedom Caucus members and, perhaps more importantly, what do they want?

10 things to know about the House Freedom Caucus

Of the publicly confirmed members of the Caucus, many are religious conservatives and right-leaning libertarians who were elected by the Tea Party wave. It was only in mid-January 2015, however, at a Republican party congressional conference that its nine founding members decided to establish a separate congressional caucus entity. They align with many Tea Party policy positions, such as a full repeal of the Affordable Care Act (more on that later).

2) Members are predominately white and male

Although the Caucus does not disclose the name of its members, and meetings always take place in private, the members we do know of are predominantly white and male. As of March 2017, it is believed that there are 36 Caucus members, all serving in the House of Representatives, and they come from are from all over the country. Membership is by invitation only.

Pew Research Center has done some of the most significant reporting on the group. Here’s Pew’s chart of the House Freedom Caucus members:

Despite having an average age of 54, the known members are considered young politicians, both in terms of experience and age. None of the members hold senior roles in their party or the government, but that doesn’t dull their uncompromising commitment to fundamental conservative ideals over party politics.

These conservatives are among some of the brightest. Overall, Caucus members are twice as likely to have doctoral degrees than other Republicans and three times more likely to have a medical or dental degree. They’ve attended better universities, too, with 25 percent of Caucus members having attended the country’s prestigious top-50 ranking universities—compared with just 12 percent of other party Republicans.

In a recent survey published by the Pew Research Center, 42 percent of all participants said that they had heard “nothing at all” about the Caucus or what it stood for. Although the Caucus did make headlines for its major role in blocking Trump’s healthcare reform effort, only 19 percent of those taking part in the survey could say that they’d heard a lot about the group.

Even amongst Caucus members, the group’s appetite for debate and notorious nitpicking on policy is clearly joked about. Founding member Mick Mulvaney is quoted as saying the name was selected because “it was so generic and universally awful that we had no reason to be against it.”

7) The bloc represent only 8 percent of House representatives

This one is just simple math. There are 247 Republican seats within the House, compared to just 188 Democrats. This safe majority allows the party to control many of the decisions about appointments and bills that pass their way. Of that majority, roughly three dozen are Caucus members, who choose to vote as a bloc on any decision regardless of party position. If Caucus members defect against the wider Republican vote on a given issue, the party’s majority is cut to, at best, 211 seats—provided that other House Republicans don’t abstain or also flip. As such, though they’re a small group, the House Freedom Caucus has the ability to upset major decisions.

A central criterion for joining the House Freedom Caucus when it was established in January 2015 was presenting opposition to Boehner, and in the first big test of its influence, the Caucus forced his resignation in a stand-off rooted in pro-life values and ideology.

Rep. Mick Mulvaney (R-SC), a founding member of the Caucus who serves the same South Carolina district as fictional House of Cards character Frank Underwood, presented a letter to Congress in September 2015 committing to blocking funding for Planned Parenthood. The organization trafficked “dead-baby parts,” he claimed, and threatened to block any Obama administration budget proposal until House Republicans stood by the social-conservative and pro-life ideals they spouted to the electorate.

With a potential government shutdown, Boehner eventually resigned. The moment was a defining one and underlined not only a new power struggle within the Republican party but the ideological accountability the Caucus wished to and could enforce.

In the most recent upset to the establishment, the Caucus threatened to vote down Trump’s attempt at healthcare reform because they didn’t believe it went far enough in dismantling the Affordable Care Act (ACA), known also as Obamacare.

Caucus members met with the president to discuss possible compromise amendments to the ACA that would buy their support in an imminent House vote, most significantly the exclusion of a key ACA provision known as Essential Health Benefits—which covered the likes of emergency rooms visits, maternity care, prescription drugs, and pediatric services.

Unable to come to an agreement, Trump withdrew the bill over fears that it would not pass. This incident, brought about again by an ideological conviction, was a major embarrassment for the president, who campaigned heavily on healthcare reform.

Having frustrated the president over healthcare, the Caucus has been dragged into a war of words with the current administration. After the ACA repeal fell through, Trump took to Twitter to call out the Caucus for hurting the “Republican agenda.”

The Freedom Caucus will hurt the entire Republican agenda if they don't get on the team, & fast. We must fight them, & Dems, in 2018!

Trump even called out individual members:

If @RepMarkMeadows, @Jim_Jordan and @Raul_Labrador would get on board we would have both great healthcare and massive tax cuts & reform.

The Caucus’ Rep. Justin Amash (R-Mi) struck back and accused Trump of bowing to the establishment.

It didn't take long for the swamp to drain @realDonaldTrump. No shame, Mr. President. Almost everyone succumbs to the D.C. Establishment. https://t.co/9bDo8yzH7I

That’s when Trump’s White House Director of Social Media Dan Scavino urged the “#TrumpTrain” to defeat Amash in primaries and called him a “liability.”

.@realDonaldTrump is bringing auto plants & jobs back to Michigan. @justinamash is a big liability.#TrumpTrain, defeat him in primary.

The bout, however knee-jerk, is unlikely to do the president any favors. The profile and muscle of the House Freedom Caucus are only rising. At worst the Caucus could choose to nit-pick the insufficiency of every policy effort, hitting the brakes in a way that could deflate the credibility of the man who rode to presidential victory berating the pandering and ineffective establishment.