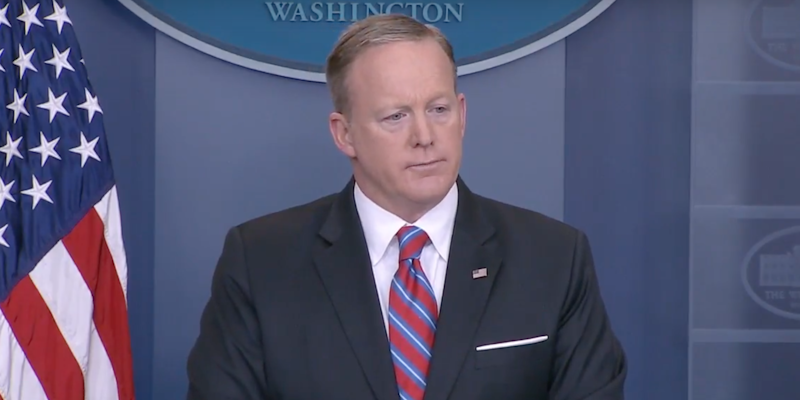 A journalist at the White House press briefing on Wednesday asked Press Secretary Sean Spicer what should have been the ultimate softball question: “Setting aside executive orders, can you say what the single piece of legislation that you are proudest you got through the Congress that was on the president’s agenda?”

This would have been the perfect time for talking points, but instead, Spicer bought himself some time with, “Well, a few things on that. Number one, we’re not done. We’ve got a little ways before we hit the 100-day mark. So I think what you’ve seen out of this White House is a very robust agenda of activity.”

Then, he moved to the crux of his point: “There’s a lot of executive orders that I think the president’s been pleased with.”

In other words, when responding to a question on what non–executive orders the Trump administration was able to push through Congress, Spicer failed to come up with anything but executive orders.

To further prove this point, he mentioned a decrease in immigration at the border, an increase in jobs, and new options for veteran healthcare, as points of pride. None of these, however, reflect legislation and the final item came directly from an executive order signed today.

This is not to say that Trump has not been able to get anything done. In addition to the executive orders that he has become known for, he has also signed 20 bills into law, including: Removing federal funding from clinics that provide family planning, making it easier for some Americans, including those with mental illness, to buy guns, facilitating internet service providers’ tracking and selling of user data, and decreasing the protections of waterways against the environmental impact of mining.