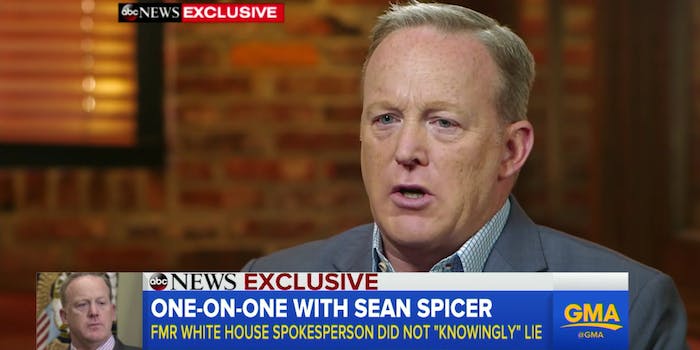 What would the fact-checkers say?

In an interview with Good Morning America, ABC New’s Paula Faris asked Spicer whether he has “lied to the American people.”

Faris pressed further: “Unequivocally you can say no?”

“Look, again,” Spicer replied, “you want to find some thing—I’ve not knowingly done anything to do that, no.”

Spicer resigned from the Trump administration in late July after the president appointed Anthony Scaramucci as White House communications director. Scaramucci resigned less than two weeks after his appointment.

Since that time, Spicer has joined a high-paid speakers circuit. He recently had a cameo during the 2017 Emmy Awards in which he spoofed the first press conference of the Trump White House when he infamously and misleadingly asserted that Trump’s inauguration crowd “was the largest audience to witness an inauguration, period … both in person and around the globe.” The claim was largely rejected as false based on photographic evidence, which inspired White House adviser Kellyanne Conway to claim that the Trump administration operates on “alternative facts.”

Asked to defend that claim by Faris, Spicer said he could have been “a lot more specific with what we were talking about in terms of the universe.”

“I think it might’ve been better to be a lot more specific with what we were talking about in terms of the universe, not focus so much on photographic evidence, et cetera,” Spicer said. “I could’ve probably had more facts at hand and been more articulate in describing … the entirety of what that day was about.”