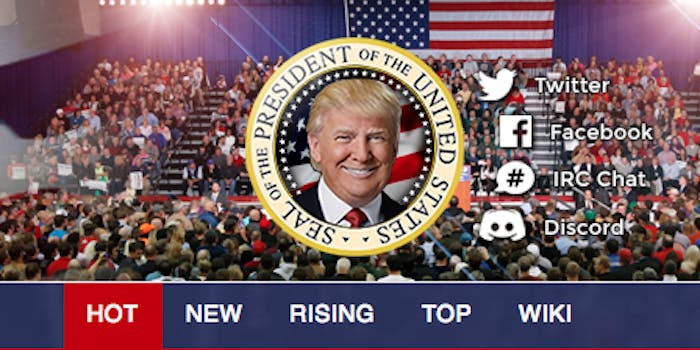 The request came as the website announced it had banned Russian-affiliated accounts.

Reddit users are demanding that the platform move to ban r/The_Donald, an influential and enthusiastic online community of President Donald Trump supporters famous for its right-wing news analysis and penchant for inflammatory rhetoric.

The petition came on Monday, after Reddit announced that it had “found and removed a few hundred accounts” suspected to be linked to Russian propaganda efforts.

An investigation published last week by The Daily Beast discovered that the Russian government-backed Internet Research Agency had utilized the platform during the 2016 presidential election to spread disinformation as part of its strategy to interfere with the American democratic process.

“Given the recent news, we’d like to share some of what we’ve learned,” said Reddit’s CEO Steve Huffman in a lengthy statement published under his personal username, Spez.

“Reddit has been mentioned as one of the platforms used to promote Russian propaganda. As it’s an ongoing investigation, we have been relatively quiet on the topic publicly, which I know can be frustrating,” he explained. “We take the integrity of Reddit extremely seriously, both as the stewards of the site and as Americans… When it comes to Russian influence on Reddit, there are three broad areas to discuss: ads, direct propaganda from Russians, indirect propaganda promoted by our users.”

Huffman went on to explain that the company had been actively banning accounts suspected to be “of Russian origin or [pushing] content linking directly to known propaganda domains.”

However, some Reddit users want Huffman to go further than addressing foreign influencers, claiming that The_Donald subreddit “has committed blatant violations of pretty much every Reddit-wide rule” and had become a nefarious den promoting “racism” and “sexism.”

The notorious subreddit first made headlines ahead of the 2016 presidential election when its users rigged online polls during political debates in a way that would favor Trump. Since then it has continued to test the boundaries on the liberal-leaning platform as a major online hub for promoting conservative news and vitriolic memes while propagating right-wing conspiracy theories—the softcore answer to 4chan’s /pol/ forum.

Despite the plea, Huffman said that he opposes banning The_Donald, arguing that it “probably won’t accomplish” what the users hope and, instead, “letting them fall apart from their own dysfunction probably will.”

Users then protested the CEO’s position by downvoting his comment and criticizing the company for its refusal to act.

“Whatever they say, the admins care more about PR than they do about rules or community,” user TheWPG wrote.

Others accused the company of actually profiting from The_Donald, which has grown to become perhaps the biggest pro-Trump community online, and framed the refusal to act as a question of metrics and traffic.