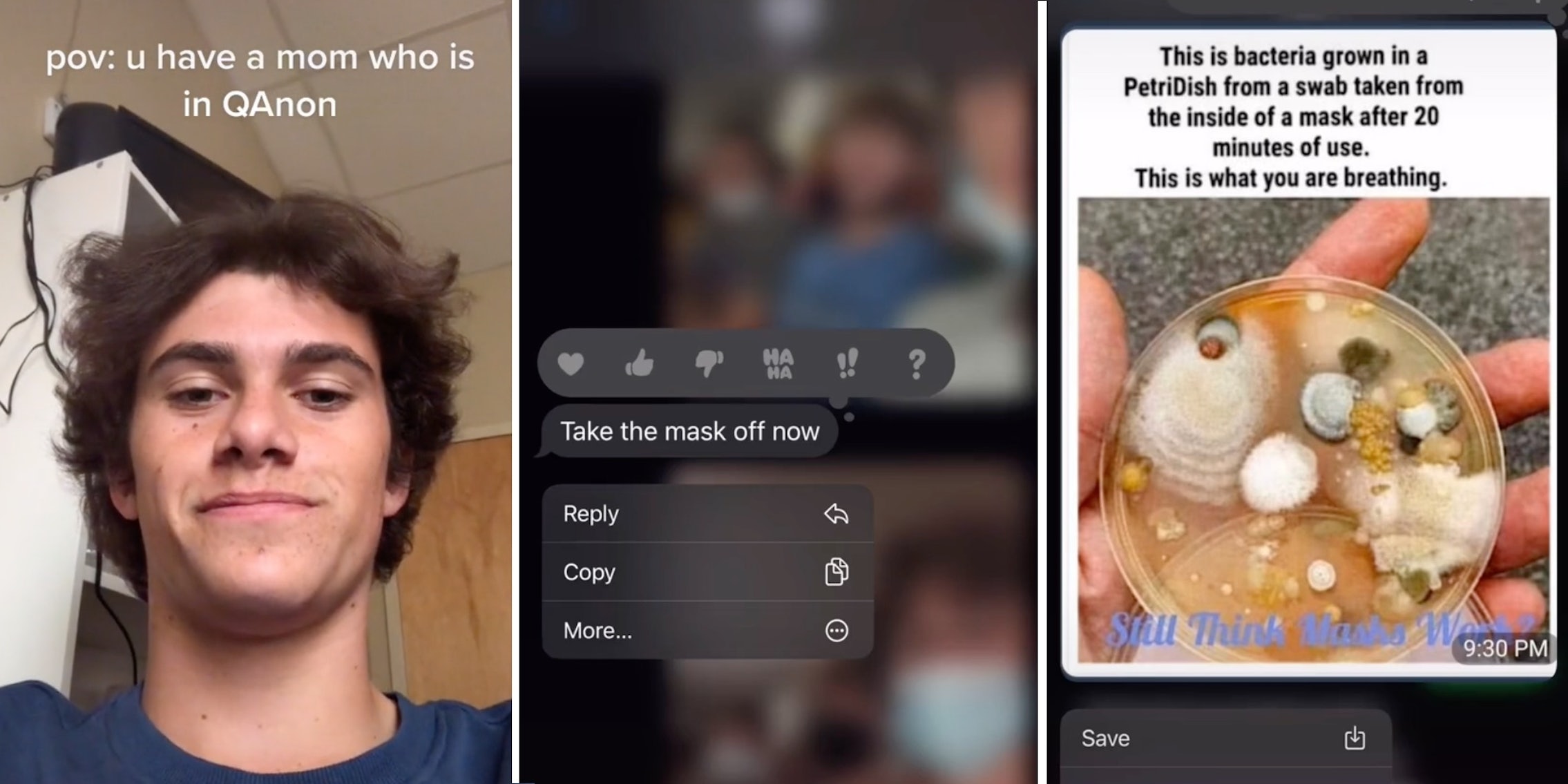 ‘It’s actually so frustrating’: TikToker shares what it’s like having a QAnon parent in viral video

Viewers shared similar interactions with their own parents.

Dealing with family members who have fallen into QAnon is something far too many people are adjusting to these days, but it can be particularly difficult when those family members are an active part of your life.

One TikToker wanted to show viewers what kind of text messages he gets from his mother, who appears to to be fully invested in what QAnon is peddling.

TikToker @mac1eann’s video has racked up over 3.5 million views since being shared on Oct. 4.

“Take the mask off now,” reads the first message, seemingly in response to him sending her photos with his friends where he is masked up.

Other greatest hits include “Do not get vaccinated Mac,” “Do not drink tap water,” and a warning that if he were to get a COVID test involving a nose swab, it would somehow secretly have the vaccine in it.

With QAnon exploding into the mainstream, these sorts of conspiracy theories don’t seem to be surprising anyone, but the frustration over them remains.

“I genuinely think these people need to have a study done on them bc how did mostly functioning adults start believing all of this,” wrote @4pirate.

“It’s actually so frustrating to see the person you are supposed to go to for guidance become so lost,” @thatdizzythingadded.

One viewer pointed out that QAnon research is “literally memes,” while another shared Mac’s pain of having a QAnon mother—“and I’m a molecular scientist,” she added.

She wasn’t the only viewer who commiserated with the drama of having a parent following QAnon.

“My mom told me that the vaccine would change my DNA and God wouldn’t let me into heaven because the name God gave us is in our DNA,” @shanemacz claimed.

And @swagmaster69 recounted her mother blaming Facebook being down so that “they could ‘destroy evidence.’”

Many QAnon theories are so outrageous that it’s hard to do anything but laugh, but the core of it is still deeply disheartening, especially when it effects someone you love.

“It’s so sad how quickly it consumes every bit of their personality,” wrote @coconutted. “They’re just gone, every topic is a conspiracy or a false statistic.”

The Daily Dot has reached out to @mac1eann via TikTok comment.