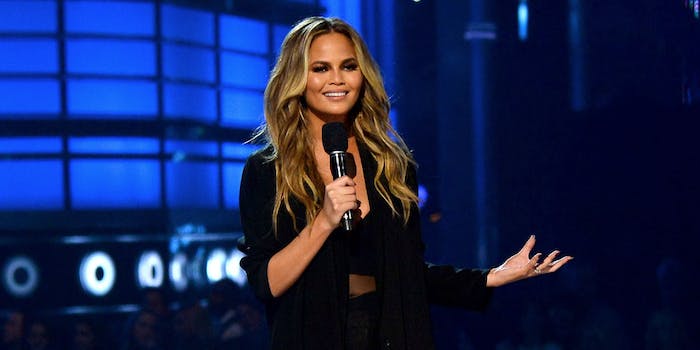 Chrissy Teigen is being harassed by QAnon supporters after miscarriage

Teigen's social media accounts were bombarded with accusations that she 'sacrificed' her child.

Supporters of the QAnon conspiracy theory celebrated on Thursday after it was revealed that celebrity Chrissy Teigen had suffered a miscarriage.

The harassment came after Teigen revealed in a post on Instagram that she had been hospitalized for complications related to her pregnancy.

Teigen has sparred with QAnon followers repeatedly online and earlier this year claimed to have blocked one million users on Twitter due to the harassment.

While the obsession with Tiegen by conspiracy theorists is nothing new, the celebration of her miscarriage by QAnon adherents shocked many.

One woman on Instagram even went as far as to accuse Teigen of sacrificing her child.

“I don’t trust you our believe you,” one Instagram user said. “I think you sacrificed your child to someone higher. You and your husband shouldn’t have sold your souls to the deep state.”

Responding to a tweet in which Teigen expressed disbelief that she was “driving home from the hospital with no baby,” another Twitter user stated that the miscarriage had been “staged.”

“THIS HAS TO BE STAGED! NO WAY SOMEONE WILL TWEET ABOUT THIS HOURS AFTER IT HAPPENED,” @Haleybluedaily said. “I THINK THIS IS A DISTRACTION FROM ALL THAT EPSTEIN THING.”

Users also sent comments to Teigen about “pizza,” a reference to the Pizzagate conspiracy theory that falsely claimed a Washington, D.C. pizzeria was being used for trafficking children.

“To all the QAnon believers harassing Chrissy Teigen after the miscarriage of her baby, saying she deserves it, you are shining examples of the worst in humanity,” @_MAArgentino said. “To those also harassing her that are non QAnon believers, you are no better.”

The QAnon movement has been linked to numerous acts of violence and has even been labeled as a potential domestic terror threat by the FBI.

Teigen is just one of many celebrities, including those such as Oprah and Tom Hanks, who have been accused of pedophilia by conspiracy theorists.