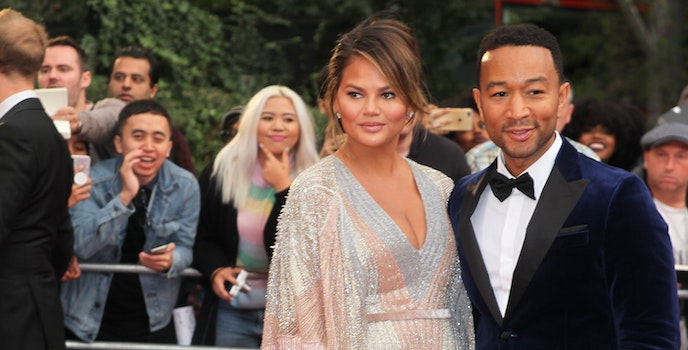 She called it a joke, and they were not pleased.

There are certain subsets of denizens of internet subcultures who cannot stand even the slightest denigration. Think fans of BTS or Jordan Peterson, and especially the online conspiracy theorists obsessed with QAnon.

Say one ill thing about their belief that President Donald Trump is secretly working to bring down a network of deep state pedophiles and you are in for it. Which is what happened to (most) everyone’s favorite power-tweeter, Chrissy Teigen.

Somehow, a conversation about a tea she likes (Tea Drops), turned into an online fight about Q.

Teigen has been a subject of fascination from “Q bakers,” the people who try to decode the conspiracy, ever since she was involved in an international flight that was forced to turn around, sparking nonsense ideas that her flight had been diverted to arrest her.

Since then, she’s been bombarded with messages by Q people on Twitter, and last night she seemed fed up enough to put them all on blast.

Criticizing one Q person led to a flood of responses about the cult.

It blows my mind that ppl think our flight was turned around so we could be arrested (no) then when we got to HK and my card declined, I would publicly admit to looking for work because my pedo dreams were shattered. Why would I be so out about my schemes? Fucking losers good god https://t.co/7Hy2nJO2T5

Teigen noted the most popular criticism of Q, that pretty much none of the predictions made by the poster, who long used the message board 8chan, have ever really come true. (It’s a valid criticism, as the whole conspiracy began with an announcement that Hillary Clinton would be arrested tomorrow—all the way back in October 2017).

The best is when these sick losers are like “LOOK!! She’s rubbing it in all our faces!!! Q is COMING!!” *Q never comes* THERE SHE GOES AGAIN!!!!! With the SYMBOLS!!! Someone do a movie on these pathetic NUTCASES I beg you

Being so bold as to point out the flaws in the theory is more than enough to earn the ire of Q fans, and Teigen was in for an evening’s worth of tweets declaring her part of the pedophile cabal Q believers want to take down.

Pretty much every one of her tweets was flooded by comments from supporters of the theory.

I wonder if Teigan is starting to get nervous? From a unamed source, reporting John & Teigan are involved in some pretty suck ,💩.

imagine this, all day every day, on every platform. defending yourself, and that defense just meaning you're getting worried. this is the exact type of person I am flooded with all day, every. fucking. day. pic.twitter.com/oJBNMZGuPS

Then there were the people who thought she was winking and nodding at it all, intimating it might be true.

Teigen, for her part, took it with her natural aplomb.

I literally literally don’t know what this means you absolute fucking nutcase pigfuck. What have you cracked here, sherlock https://t.co/xDsPrkzyP0

This is what kills me. If it were just me that got it, fine. But they leech onto every conversation, no matter the topic. They write my friends, my family, the people I follow from 90 day fiancé. What in the fuck https://t.co/utcJHSnUii

Hi. I do not know how to tell you that I do not know the answer to this. I sit on my couch, I take care of my kids, work and I cook food. not everyone in Hollywood is some demonic warlord and not everyone has an elaborate agenda. https://t.co/K4H3gsSlS1

While Teigen tweeting about tea shouldn’t draw in thousands of Q posters, with 8chan down, they really have nothing better to do.