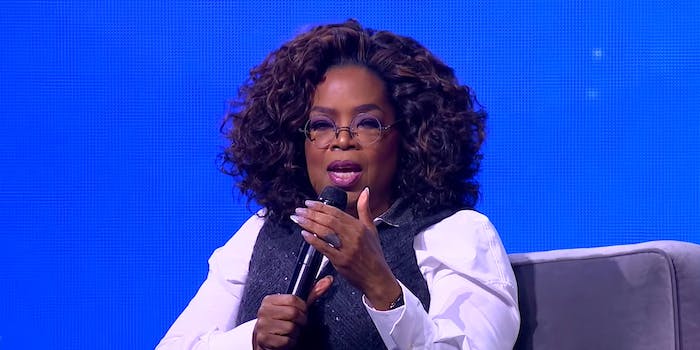 The subject trended so heavily that Oprah herself came online to deny the hoax.

Late last night, phrases such as “damn Oprah” and “OPRAH DID WHAT” began trending on Twitter in reference to Oprah Winfrey having her home raided and being arrested for child trafficking.

Which, as you can probably assume, did not happen.

The collective online fervor was so strong and sudden that Oprah Winfrey came online in the middle of the night herself to squelch the rumors as a hoax.

The video that seemed to act as the powder keg for this conspiracy blowing up belongs to the YouTube channel David Roland World News. A video posted by the account on March 16 features Roland ranting in the middle of an empty parking lot for eight minutes about Oprah’s home raid, tunnels leading to her Florida home, as well as other subjects like the incoming possibility of martial law.

Another video on the account also posted on March 16 shows the supposed “bodycam footage” of the police raid on Oprah’s home. The video shows law enforcement entering a modest home in a seemingly suburban neighborhood, not a Florida mansion.

The conspiracy also implied that Harvey Weinstein had provided testimony on Winfrey in exchange for the shortening of his 23-year prison sentence.

Although Roland’s YouTube content is QAnon-esque in nature, he does not seem explicitly tied to that specific conspiracy theory. The theory posits that celebrities and Democrats are running a secret pedophile ring. Tom Hanks, who came up in some of the posts about Oprah last night, is alleged to be involved.

While Hanks is in quarantine in Australia after a coronavirus diagnosis, conspiracy theorists are speculating he is really under house arrest.

Previously, Oprah has been criticized by fans and peers alike due to her past friendship with Weinstein and her failure to directly and outright condemn it. Recording artist Seal criticized images of the two smiling together through an Instagram post but later apologized for specifically targeting Winfrey.