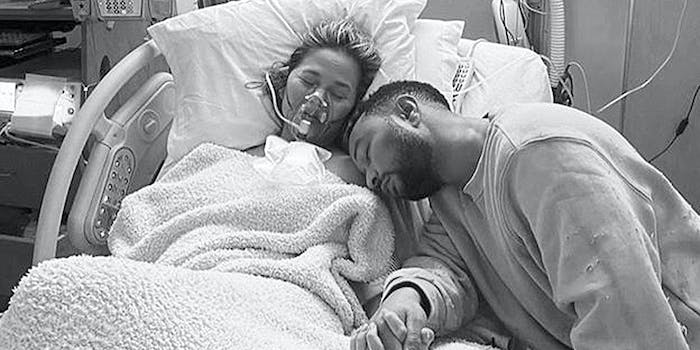 Fans share their miscarriage stories to comfort the beloved actor.

BuzzFeed News reported on Monday that Chrissy Teigen had been hospitalized for ongoing bleeding during her pregnancy with her third child. The tragic story prompted fans to show their love and support for the model amid the news. Then, last night, Teigen shared a photo on Instagram, notifying her followers that she had miscarried.

“We are shocked and in the kind of deep pain you only hear about, the kind of pain we’ve never felt before. We were never able to stop the bleeding and give our baby the fluids he needed, despite bags and bags of blood transfusions. It just wasn’t enough,” Teigen started the post. The five-photo slide show displays moments from her hospital room, some with her husband John Legend. The couple has been married since 2013 and has two children together, Luna and Miles.

“We never decide on our babies’ names until the last possible moment after they’re born, just before we leave the hospital.  But we, for some reason, had started to call this little guy in my belly Jack.  So he will always be Jack to us. Jack worked so hard to be a part of our little family, and he will be, forever,” she continued in the post.

“Thank you to everyone who has been sending us positive energy, thoughts and prayers. We feel all of your love and truly appreciate you. We are so grateful for the life we have, for our wonderful babies Luna and Miles, for all the amazing things we’ve been able to experience.  But everyday can’t be full of sunshine. On this darkest of days, we will grieve, we will cry our eyes out. But we will hug and love each other harder and get through it,” she concluded.

The first photo from the series, which shows a heartbroken and devastated Teigen in tears while sitting on her hospital bed, was also posted to Twitter along with the post’s caption. The tweet, which has amassed over 670,000 likes, resulted in hundreds of warm messages from fans and celebrities alike. Some Twitter users even shared their miscarriage stories as a means to let Teigen know she is not alone in this traumatic experience.

According to the Mayo Clinic, nearly 10 to 20% of known pregnancies end in miscarriage, but the percentage could actually be higher, given that miscarriages typically occur so early in pregnancy that some women may not even realize that they were expecting.