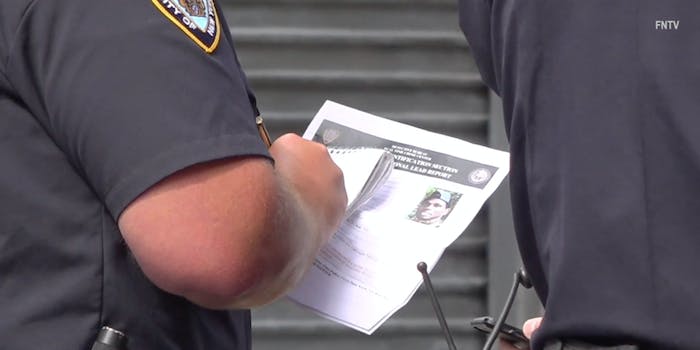 The New York Police Department (NYPD) used facial recognition technology as part of an investigation into a Black Lives Matter activist prior to surrounding his home last week.

More than 50 officers descended on the apartment of 28-year-old Derrick Ingram last Friday after police claim the activist damaged an officer’s ear by shouting in a megaphone nearly two months ago. Ingram live-streamed the six-hour “stand-off” with police. “What did I do? What did I do? I was born Black. That’s what I did,” Ingram said during the stream, according to the New York Times.

Other activists, who arrived on the scene as police attempted to coax Ingram out of his home, noticed one officer holding an “Informational Lead Report” from the department’s “Facial Identification Section.”

The document included an image of Ingram’s face, allegedly taken from a photograph posted to his Instagram account.

In a statement to Gothamist, an NYPD spokesperson confirmed that facial recognition had been used to help confirm the identity of Ingram during its investigation.

“The NYPD uses facial recognition as a limited investigative tool, comparing a still image from a surveillance video to a pool of lawfully possessed arrest photos,” the spokesperson said.

The NYPD also added that “no one has ever been arrested solely on the basis of a computer match.”

Civil liberties advocates are pushing back given that the NYPD had previously claimed that facial recognition technology would only be used in serious crimes such as robberies and shootings.

The NYPD is defending its use of facial recognition, however, due to the claim that an officer’s ear was temporarily damaged from Ingram’s bullhorn use.

Ingram was never arrested, and police, who claimed to have a warrant but failed to present it, eventually left the scene.

Now, Dorothy Weldon, Ingram’s attorney, says that steps are being taken to learn the tactics used by police to investigate her client.

“We look forward to uncovering what role, if any, this problematic technology played in officers’ decision to, without a warrant, mount a five-hour intimidation campaign against Mr. Ingram that interfered with his constitutional rights,” Weldon said.