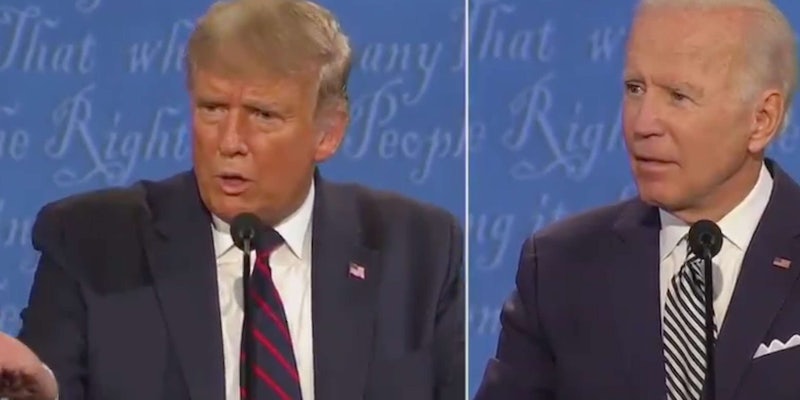 Asked to condemn white supremacists, Trump tells them to ‘stand by’

The president instead told the Proud Boys to 'stand back and stand by.'

While discussing violence and race relations in the country, Trump was asked by debate moderator and Fox News host Chris Wallace to denounce racist extremists.

“Are you willing, tonight, to condemn white supremacists and militia groups and to say that they need to stand down?” Wallace asked.

Trump responded by tiptoeing around the question and instead pushed back on “antifa.”

“I would say almost everything I see is from the left-wing, not the right-wing,” Trump said.

When pressured further by Wallace and former Vice President Joe Biden, Trump told the right-wing group Proud Boys not to stand down but to “stand back and stand by.”

Trump’s apparent refusal to outright condemn white supremacists immediately sent shock waves across social media, with many arguing that the president’s wording was no mistake.

“Trump didn’t denounce white supremacists,” political commentator Mark Lamont Hill said. “He told them to ‘stand back and stand by.’ This wasn’t an accident.”

Numerous former presidential candidates weighed in on the moment as well, expressing shock and dismay at the president’s decorum.

“Did the President of the United States just instruct a white supremacist group to ‘stand by'”? Pete Buttigieg asked.

On Telegram, according to BuzzFeed reporter Jane Lytvynenko, Proud Boys cheered on the president’s answer.