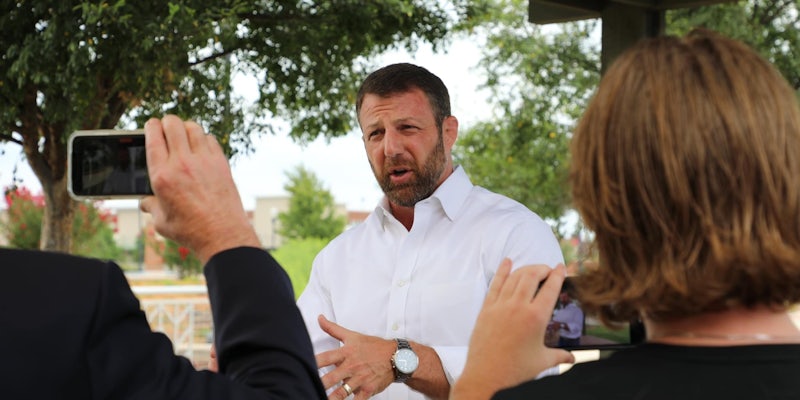 The former cage fighter is bringing back campaign talking points from elections past.

Instead of a sepia-hued snapshot from a bygone era, the former cage fighter is bringing back campaign talking points from elections past: build the wall, buy the guns, and force people to give birth.

Mullin is obsessed with socialism. (Unless he’s getting a $1.4 million Paycheck Protection Program loan, then he’s all for it.)

Much like how I feel about head cheese, Mullin’s not entirely clear on what socialism is, but he knows he doesn’t like it.

A lot of Mullin’s views don’t appear to be based in reality.

During the 2020 election he shared the inane conspiracy theory that Vice President Kamala Harris was actually going to be commander-in-chief.

Mullin has claimed that the Green New Deal is a secret plan for the government to seize control of travel, education, housing, and the food supply. Which is categorically false.

The strangest things inspire Mullin to display his ignorance, such as when he became incensed by New York schools introducing meatless Mondays. Mullin simply could not get over “the idea that they’re tying in beef to climate change.” Cattle are a significant source of greenhouse gasses.

Speaking of beef, Mullin has some with the man he’s looking to replace. In July, Sen. Tom Inhofe (R-Okla.) told the Frontier, “Markwayne and I, we have problems.”

Inhofe blasted Mullin for attempting an unauthorized trip to Afghanistan, calling it a political stunt that would’ve put Americans and our allies at risk. And he was skeptical about Mullin’s stated desire to serve on the Armed Services Committee.

Other Oklahoma Republicans have similar misgivings about Mullin.

The internet is littered with Mullin’s thoughts about the “sham impeachment,” ignorance about the impacts of cow farts, and ruminations about the anarchist socialists (not the same thing—but whatever) he’s convinced are hellbent on tearing America apart.

With hot takes like that, it’s almost impressive that he still managed to create the podcast equivalent of a white noise machine.

In deep red Oklahoma, it’d be a major upset for Democrat Kendra Horn to win the Senate seat Inhofe is vacating.

Love him or hate him—and plenty of Republicans lean towards the latter—unless Horn pulls off a Sooner State miracle, Mullin will be Oklahoma’s next senator.