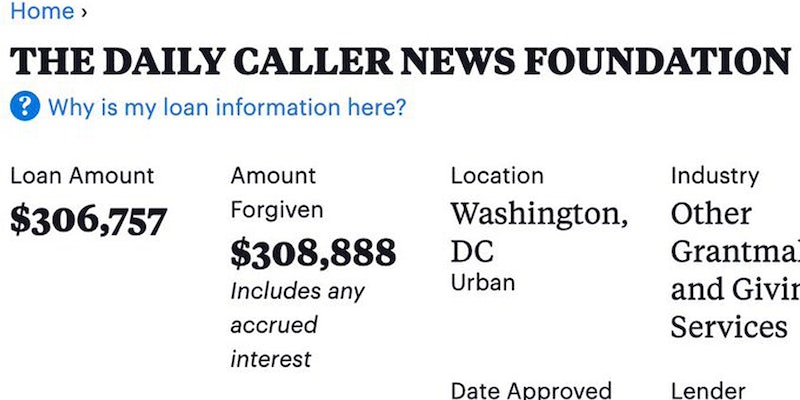 Opponents of President Joe Biden’s student loan forgiveness plan are being accused of hypocrisy for having their own loans forgiven by the government.

The White House announced on Wednesday that up to $10,000 in federal student loan debt for borrowers earning less than $125,000 per year would be canceled. Recipients of Pell Grants would also have up to $20,000 of their loans forgiven.

The plan has proven controversial politically, with those in support arguing that it doesn’t go far enough. Those opposed say the debt forgiveness unfairly burdens taxpayers who declined to attend college or already paid off their loans.

But Twitter users are now pointing out that many of those opposed to the plan had their Paycheck Protection Program (PPP) loans forgiven during the COVID-19 pandemic.

The Twitter account for The Serfs, a comedy news podcast, pointed to several high-profile conservative figures and entities who fell into the category.

News organizations such as The Daily Caller News Foundation had its $300,000 forgiven as well. The media company run by Steven Crowder was also on the list.

The Daily Caller’s coverage of student loan debt has been wildly anti-forgiveness. Crowder has mocked it on Twitter.

“Every single right winger who is complaining about government handouts or student loan forgiveness are monstrous hypocrites,” The Serfs wrote. “Their grift depends on selling you ‘big government and social programs bad’ while they love taking advantage of them.”

Even lesser-known Twitter users weren’t spared. A corporate strategist who complained about the plan was quickly found to work for a company that had a more than $1.6 million loan canceled as well.

“This you?” a Twitter user said in response to the complaint alongside a screenshot of the loan details.

Countless other Twitter users also made references to PPP loans in response to tweets from conservative politicians.

A Republican congressman from Oklahoma who criticized it was found to have $1.2 million in PPP loans forgiven.

After arguing that “transferring billions of dollars in student loan debt to taxpayers in the middle of a recession” was a “terrible idea,” Rep. Troy Nehls (R-Texas) was asked if he felt the same about PPP loans during the presidency of Donald Trump.

Biden’s plan is expected to clear the balances of as many as 9 million borrowers. The president also stated on Twitter that he would extend “one final time” the payment pause on most federal student loans.