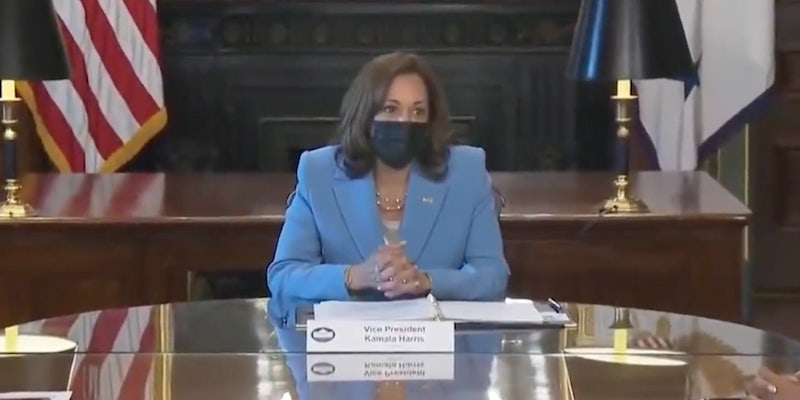 'It's an event commemorating the Americans with Disabilities Act, you mean-spirited ghoul.'

Republicans on Twitter are being called out after criticizing Vice President Kamala Harris’ comments at a disability roundtable Tuesday afternoon.

The vice president hosted disability advocates at the White House to commemorate the 32nd anniversary of the Americans with Disabilities Act and to discuss the effects of the recent Dobbs v. Jackson Supreme Court ruling on the disability community. As part of her introduction, Harris said gave some descriptors to aid the visually impaired at the roundtable.

“I am Kamala Harris,” she said. “My pronouns are ‘she’ and ‘her.’ I am a woman sitting at the table wearing a blue suit.”

A clip of her introduction went viral on Twitter, and Republicans were seemingly outraged by the idea that the vice president would describe her suit, apoplectic at the kind of progressive inclusivity effort they despise.

The Republican National Committee tweeted out the clip and mocked Harris.

Other conservative Twitter users rushed to prove their ableism to the world.

“Why didn’t she also describe the way her breath smells for people who can’t smell then?” asked popular conservative Tim Young.

“Kamala Harris just introduced herself with she/her pronouns at an official event,” said far-right Rep. Lauren Boebert (R-Colo.). “She then clarified that she was a ‘woman’ sitting at the table wearing a blue suit. This is what happens when your speechwriter quits and you hang around with Geriatric Joe too long.”

Twitter users were quick to call out Republicans for being upset, noting that it was an event that included people who were sight-impaired.

“It’s an event commemorating the Americans with Disabilities Act, you mean-spirited ghoul,” one user said in a tweet. “Attendees decided to help blind participants feel more included by using visual language when introducing themselves.”

“Did you consider the possibility that vision-impaired people might be attending or watching AN EVENT SPECIFICALLY FOCUSED ON PEOPLE WITH DISABILITIES?” another user wrote.