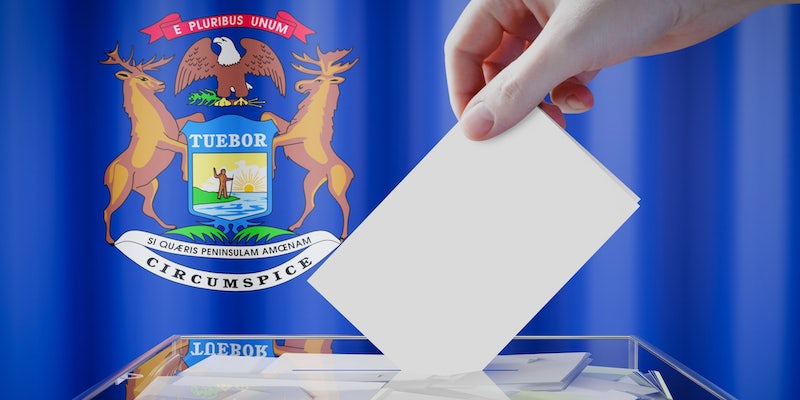 'They’re afraid of what it looks for multiracial organizing to be growing towards a more progressive future.'

Michigan was the epicenter of some of the most egregious lies that the 2020 election was stolen. The effort to overturn the results in favor of former President Donald generated some bizarre headlines. The state was the scene of Rudy Giuliani’s infamous COVID-19 flatulence, where one of his witness’ incoherent ramblings earned a Saturday Night Live roasting. It is also the state on which Trump released the ill-fated Kraken.

Although those efforts ultimately failed and more than 250 audits confirmed the election’s integrity, a ballot initiative is underway to change Michigan voting law as a direct result of those falsehoods.

The very ballot initiative ostensibly designed to root out fraud in Michigan is itself fraught with fraud. There are multiple reports of canvassers lying, misleading, and forging signatures. The group behind the initiative, Secure MI Vote, has even admitted that thousands of signatures its paid canvassers gathered were forged. Critics also say that Secure MI Vote’s initiative is unnecessary and designed to make it harder to vote, including for marginalized and minority voters.

Nancy Wang, executive director of Voters Not Politicians, told the Daily Dot that the issues they’re seeing with the Secure MI Vote initiative are unprecedented. “We haven’t seen fraud like this before,” Wang said.

In response to such reports, the nonpartisan Voters Not Politicians launched an online tool for people to report canvassers lying to and misleading people.

Secure MI Vote didn’t respond to a detailed request for comment sent via email on Monday.

Secure MI Vote itself acknowledged signature fraud, which it blames on paid canvassers. On June 1, it announced that 20,000 signatures were forged. Secure MI Vote decided not to submit the petition by the deadline but is continuing to collect signatures, which it can submit at a later date.

Voters Not Politicians obtained a recording of a Secure MI Vote canvasser lying to voters to induce them to sign the petition. While unethical, it’s perfectly legal, Wang said. “They can actually legally lie to people.”

One of the people refused to sign. The other, who’d just signed it, said they wished they hadn’t.

Then the canvasser lied again.

“It’s not saying you’re for or against it,” they said, assuring them that if they get enough signatures, then the initiative will go on the ballot and people in the state can vote on it.

“Their goal was never actually to get this onto the ballot, it is to exploit a loophole in Michigan law,” Art Reyes III, executive director of We the People in Michigan, told the Daily Dot.

We the People in Michigan urges voters not to sign the Secure MI Vote petition. According to Bridge Detroit, the ballot needs approximately 340,000 signatures, 8% of people who voted in the last election.

Both Reyes and Wang are among those who believe that the Republican-backed and dark money-funded effort is designed to suppress turnout among groups who historically tend to vote for Democrats.

If enacted, the law would prohibit the Secretary of State and election officials from sending unsolicited applications for absentee ballots. It would also prohibit private funding or in-kind contributions to help conduct elections, and toughen Michigan’s voter identification laws.

Voters are already required to show ID in Michigan. Absent an ID, they’re permitted to vote via affidavit under penalty of perjury. Bridge Michigan reports that 0.2% of the 5.6 million Michiganders who voted in 2020 exercised this option. Under Secure MI Vote’s provisions, voters without ID could still vote, but they’d have to return to the elections office within six days to show their ID—otherwise, their vote won’t be counted.

People voting via absentee ballot would also have additional requirements if Secure MI Vote becomes law. Under current law, voters show ID and provide the last four digits of their social security number (SSN) to request an absentee ballot. Election officials tabulating the vote confirm their identity by matching signatures from their ID to the ballot. Secure MI Vote would require absentee voters to also write either their state ID number or the last four digits of their SSN on the ballot, which elections officials would verify along with the signature before their vote could be counted.

Critics say it’s actually designed to suppress turnout in a swing state where elections are often won by razor-thin margins.

“The whole package will disproportionately affect people who have fewer options to vote,” said Wang.

Reyes believes that the effort is a direct response to successful grassroots organizing among working-class and minority voters.

“This is a naked right-wing attempt to power grab at every point that they can because they’re afraid of what it looks like for multiracial organizing to be growing towards a more progressive future,” Reyes said.

“This is about power. It’s not about what the public wants. There’s not a public demand for this,” he added.

They also say it’s a solution looking for a problem. “There’s been no fraud,” Wang said of the roughly 11,000 people who voted via affidavit in 2020.

Both pointed out that Michigan voters want a more representative government, as evidenced by the passing of a 2018 ballot initiative that banned partisan gerrymandering. Voters Not Politicians was behind that petition.

Wang contrasts that initiative, Proposition 2, with Secure MI Vote’s effort. Voters Not Politicians exclusively used volunteers to gather signatures; Secure MI Vote has paid canvassers. The one lying in the video says they traveled from Florida to gather signatures. Proposition 2 was approved in the 2018 general election. Because the Republican-majority legislature has already voted for its provisions, if it gathers enough signatures, Secure MI Vote doesn’t have to be approved by voters. The legislature can simply enact it and circumvent the governor’s veto.

“They’re turning the citizen’s initiative on its head,” Wang said.