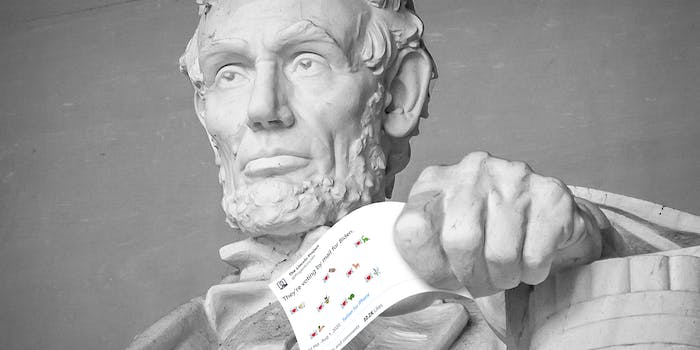 The Lincoln Project may be the internet’s biggest tweet thief

They say imitation is the highest form of flattery.

If so, the Lincoln Project is the internet’s biggest stan. The political action committee launched by never-Trump Republicans creates a lot of its own content. But it has repeatedly come under fire for constantly stealing tweets.

Over the weekend, the Lincoln Project was blasted for stealing @ScribblnTaylor’s viral tweet about the U.S. Postal Service.

Since then, other have pointed out that it’s hardly the first time the Lincoln Project has been caught snacking on someone else’s Twitter feed.

The list of people who have accused them of stealing tweets includes both major and minor Twitter players.

When caught in the act, the Lincoln Project doesn’t deny it—nor do they tend to apologize.

When comedy writer Grace Spelman confronted them for using a video she created without attribution, they responded, “… you’re upset that we posted a video you didn’t film featuring a song you don’t have the rights to. Did I get that right?”

The Lincoln Project’s tweet thievery has actually become something of a running internet joke.

“Amazing that @ProjectLincoln gets CANCELED not for being a bunch of neocon mouth-breathers, but for *squints* stealing everyone’s content,” said Washington Examiner writer Siraj Hashmi.

Erin Gaetz, the lesser-known Gaetz sibling, tweeted, “Of course @ProjectLincoln’s best memes are stolen without credit or attribution. You really thought those dusty old bros thought that stuff up for themselves?”

As some have pointed out, reposting others’ content is part of internet culture—but crediting creators is always best practice and often much appreciated.

But it’s also true that when it comes to stealing tweets, the expectations are higher for, say, a super PAC with $20 million dollars and nearly two million followers than an account dedicated to kitten memes.