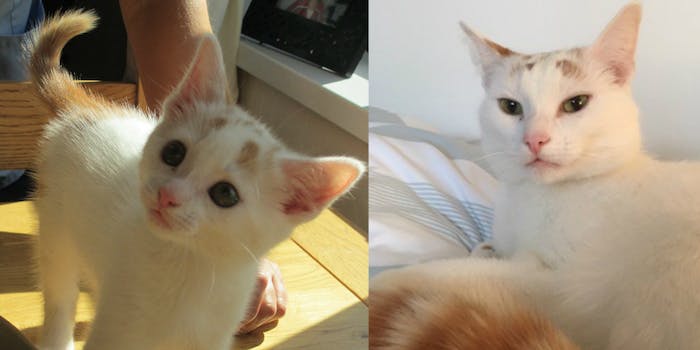 Cats can have glow ups, too.

To make everybody’s Friday better, Twitter user @ellle_em started an awesome, wholesome trend: asking cat owners to post a picture of their cat right after adoption next to a recent photo so everyone could see the “cat glow up.”

A “glow up” is a change for the better in style or confidence. Since it’s become a well-known meme, usually with before-and-after makeover pictures and photos of people at different ages, why not apply it to cats?

To kick it off, Elle started with pictures of their own adorable furballs.

Babby Wooloo is in the midst of an extreme #CatGlowUp pic.twitter.com/OdAPLxkdgh

Not pictured: all the other abandoned street cats Elle takes in.

Hey while you're here! I live in Spain and I take in abandoned/unwanted cats and try to find families for them. If you're able, please consider taking a look at my wishlist for Cat Stuff!https://t.co/IHUAGN1Eev

Some hours later, Twitter user @CAwkard got ahold of the hashtag and tipped it into virality.

In the thread, some cats had sad backstories, which made their glow ups even more heartwarming.

As a kitten, Kilter caught an eye infection before his eyes were even open. He has grown up to be a very handsome #pirate cat. #CatGlowUp pic.twitter.com/3P4r4Nuq0s

#CatGlowUP Here's our little runt lady Gloria Allred. First pic is the day after we pulled her and 7 other kittens from a junk heap. Second is her yesterday inspecting my goodies from a community cat conference! pic.twitter.com/01wNEbAQRy

It’s good to see that, even with his spectacular cat glow up, Mr. Ping has stayed true to his roots: He’s still furious.

Mr. Ping on adoption day vs now
if this isn't a #CatGlowUp idk what is pic.twitter.com/tOOXZjanFz

Even the ones who started out as adorable kittens blossomed into beautiful cats.

This story is particularly heartwarming:

Fun fact when Mabel was little my dad once cried when she looked at him bc she was so cute pic.twitter.com/1p7IV68nwg

While we’re here, let’s send some extra love to black kitties, since they are less likely to be adopted than cats of other colors.

Well #CatGlowUp certainly is a fun # for the day. pic.twitter.com/ae7lwF1qSZ

This person is a hero, and her boy’s a little fighter.

Kaiden was dumped at a shelter because of his ears, and was dying of a respiratory infection. They told me over and over not to adopt him because he was dying. I didn’t listen. #CatGlowUp pic.twitter.com/juATbNYqHh

As you can see, giants walk among us.

#CatGlowUp
The day we brought Titian home vs now. He got bigger. pic.twitter.com/1Njz9TQh0Q

Since the world is on fire right now, physically as well as metaphorically, take some time to look at these cat glow ups. It’s self-care!

Our Katyusha, who has been with us for almost 2 weeks. #CatGlowUp pic.twitter.com/i7xs9H6NPA

They were only supposed to stay here for a couple of weeks until the shelter had more room, but here we are five years later #CatGlowUp pic.twitter.com/G72I16zmNp

Correction: A previous version of this article misspelled Elle’s Twitter handle and referred to Elle with incorrect pronouns. Elle’s handle is @ellle_em, and the pronouns have been updated.