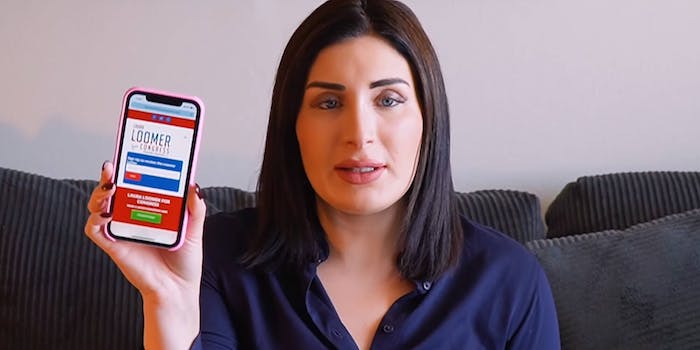 Laura Loomer may be a fringe candidate, but she’s being funded by big-time GOP donors

She out-raised the incumbent last quarter.

Most people didn’t think for one second that Laura Loomer was a serious candidate for Congress. When she announced her candidacy in August, it seemed safe to assume she’d collect a few bucks from her loyal fans, get a tiny percentage of the vote, then disappear from the 21st Congressional district the moment ballots were counted.

Some of that’s still likely, of course. But to everyone’s surprise, even hers, Loomer collected a rather respectable $154,000 in the first two months of her campaign. She even bested the haul of her opponent, four-time incumbent Rep. Lois Frankel (D-Fla.), by nearly $50,000, though Frankel still has a war chest of $1.1 million.

Even more surprising than how much money Loomer’s getting is who she’s getting it from—her backer include some heavy hitters in Republican circles. Her donor pool is dotted with CEOs, doctors, and millionaires.

Loomer, it seems, is being treated like a legitimate candidate. This is probably unfamiliar for the 26-year-old far-right conspiracy theorist who’s been banned by Twitter, Facebook, Instagram, PayPal, GoFundMe, Medium, Venmo, Instagram, Uber, and Lyft. Uncharacteristically, Loomer said she was “humbled” by the support.

“Despite the radical left, big tech tyrants and the fake-news media doing everything they can to hinder my campaign, this early showing puts career politician Lois Frankel and the do-nothing-Democrats in Congress on notice that no seat is safe and that I’m running to win,” she added, according to Forward.

It’s quite a turnabout for the woman who once jumped the fence to Rep. Nancy Pelosi’s (D-Calif.) private property to protest immigration.

Cherna Moskowitz is a super-donor among super-donors. Loomer is one of nearly 200 Republican candidates, PACs, and statewide parties to receive donations from Moskowitz this year. FEC records state that other recipients include Reps. Nunes and Crenshaw; state Republican parties in North Carolina, Colorado, Ohio, Iowa, Illinois, Virginia; and more than $300,000 to the Trump Victory Super PAC.

Like Loomer, Moskowitz is Jewish and a Zionist. Over the course of several decades, she and her late husband, Irving Moskowitz, spent millions buying property for Jewish people in predominantly Arab neighborhoods in eastern Jerusalem, the Jerusalem Post reported upon his 2016 death.

Loomer has made accusing people of anti-Semitism one of the hallmarks of her trolling. On her campaign website, she describes herself as “a Jewish Conservative investigative journalist and activist.”

The name Anthony Cuccolo doesn’t pop up much in donor circles. According to the Florida Division of Elections, Cuccolo has never donated to a single in-state candidate. Per FEC records, he hasn’t given to a federal candidate in the last 40 years, as far back as the electronic data goes.

This year he made an exception and donated $2,800 to Loomer.

Cuccolo, a retiree according to his FEC disclosure, could easily slip under the radar. But his name pops up in association with Fox News’ personality Judge Jeanine Pirro; the pair appear to be dating. Cuccolo and Pirro have been together at numerous events in recent years, including one with Eric and Lara Trump at Mar-a-Lago that Pirro posted on Facebook and Twitter. Cuccolo’s Boca Raton residence is just 30 miles away from West Palm Beach, where Pirro lives.

Cognex founder Robert Shillman is another GOP mega-donor with one foot in the mainstream, the other on the fringe, which probably explains his $2,800 donation to Loomer.

This year Shillman has given thousands to a litany of candidates, including Trump, Sen. Cory Gardner (R-Colo.), Sen. David Perdue (R-Ga.), and others. In 2008, President George W. Bush selected Shillman to join him on a trip to celebrate Israel’s 60th anniversary in Jerusalem.

In addition to being part of the Republican politi-stocracy, Shillman walks on the wild side of the GOP. As recently as 2015, he was a director of the David Horowitz Freedom Center, which the Southern Poverty Law Center describes as anti-Muslim and anti-immigrant. It isn’t known whether he’s still affiliated.

Months after the 2015 mass shooting at Charlie Hebdo, Reuters quoted Shillman speaking approvingly of a controversial contest in Texas to draw the Prophet Muhammad. The contest turned deadly when two men opened fire before being quickly killed by police. These were the only casualties. The contest was in part organized by Jihad Watch, a website of the David Horowitz Freedom Center. (Earlier this year, Jihad Watch director Robert Spencer wrote an attack piece about this reporter following the publication of a piece about hate groups on Facebook.)

Like Loomer, whose many bans have often followed Islamphobic comments, Shillman has been accused of being anti-Muslim, which he has denied. In 2015, the Intercept reported that Shillman was funding opposition to the U.S. accepting Muslim refugees from Syria and Iraq, and that he donated to the anti-Muslim ACT for America. Following Trump’s Muslim ban, Shillman was also named in an amicus brief supporting the ban filed by American Law Freedom Center, which the SPLC identifies as an anti-Muslim hate group.

Much like the candidate herself, Loomer donor Steve Alembik is no stranger to stirring up controversy on social media.

Last year, Alembik, who gave Loomer $5,600, pulled the old “if it’s okay for Black people, why can’t White people use the N-word” excuse after he referred to Barack Obama by the racist slur on Twitter, Politico reports. Alembik denied that he was racist.

Sometimes a news story doesn't capture the whole flavor of an interview. And mine w/Steve Alembik was bizarre. Most people would lie and/or hang up (eg this Orlando Republican who posted a racist slavery 'paybacks' meme https://t.co/27M2aDBzt1)
Here's a lightly edited transcript pic.twitter.com/j4BH3kAtNV

After his tweet made news, Alembik made his Twitter feed private, but not before Haaretz reported that he’d called Ruth Bader Ginsberg a “senile fool” who “can’t die soon enough,” and referred to Omarosa Manigault-Newman as a “rat bitch.” Since then, Alembik appears to have changed his handle or deleted his account.

Other notable Loomer donors include Bill Diamond, a former Palm Beach city councilman and longtime friend of Rudy Giuliani; Korff Holdings CEO Joe Korff, who attended Trump’s one-year anniversary dinner at Mar-a-Lago alongside Cuccolo; and Steve Selig III, who worked in the White House during the Carter administration and has since become a parking lot mogul in the Southeast.

She may not have much chance of winning the heavily Democratic South Florida district, but Laura Loomer is going to make a much better showing—at least in terms of donations—than many expected. Nevertheless, of the dozens of her donors the Daily Dot contacted to ask why they support her and what they hope she might accomplish in Congress, almost none were willing to talk. “I don’t have time for this,” one said before abruptly hanging up on a reporter.

“I agree with all her views. She’s pro-Israel, she’s brave,” said Patricia Di Bella, the sole donor willing to comment. Di Bella, who donated $520.20 to Loomer, added, “She shares my values.”

Her supporters aren’t so shy on YouTube, one of few mainstream platforms that haven’t banned her. Emboldened by the anonymity of a screen name, some of the 2,700 who’d watched her deeply amusing “How to Donate to Laura Loomer” video as of Nov. 14 were exuberantly supportive.

“I am so excited for this opportunity for Laura Loomer. This will be such a good thing for America if she gets into Congress. Same with George Papadopoulos in Cali. Let’s take this country back from those who are trying to destroy it.” “Yep I think this is great I vote for Lorna [sic] because why should democrat[s] be the only ones to have a radical on their side, maybe it’s about time republicans had more radicals to get the f****** job done,” and “I want to BREED you Laura!” were among the comments.

Many weren’t quite so positive, however.

“Unfortunately, Laura doesn’t stand a chance at congress. She’s been banned off almost every social media site and her YouTube videos get a paltry amount of views. She’ll know what it was like to be Faith Goldy after this upcoming election,” said one. One brought up persistent rumors that she dug up and released Kyle Kashuv’s use of the N-word to get back at him for talking smack about her pal Jacob Wohl on Twitter.

“Why did you get Kyle Keshav Harvard scholarship rescinded… I thought it’s all about Free Speech.”

A few noted the video’s really bad editing job as exemplified by the green light still visible on “Loomer’s” fingers (it’s actually a Shutterstock video), among other shoddy details.

Several who commented said they wanted to donate but couldn’t because they’re in foreign countries. By law, foreigners can’t contribute to American candidates.

Loomer’s support is undeniably imported, though not from quite as far afield.

In fact, other than Loomer, 17 Floridians donated to her—and two of these are husband and wife. Only a handful of her donors reside in her district. Some have multiple addresses and may have used their out-of-state residence on donation paperwork. The Daily Dot also found a few mistakes in donors’ addresses; for example, one donor is reported to live in La Jolla, New Jersey. There is no such town in New Jersey; there is, however, one in California with a ZIP code that matches that in the disclosure.

There is at least one other address with a similar disagreement between ZIP code and state.

Thus it is possible that she has more—or fewer—local and in-state donors.

There is one thin line that Republican donors won’t cross, however, even in Florida. In spite of having a four-month head start, Republican Matthew Lusk, an open QAnon follower, hasn’t received a penny for his bid to unseat Rep. Al Lawson (D-Fla.), per campaign finance records.