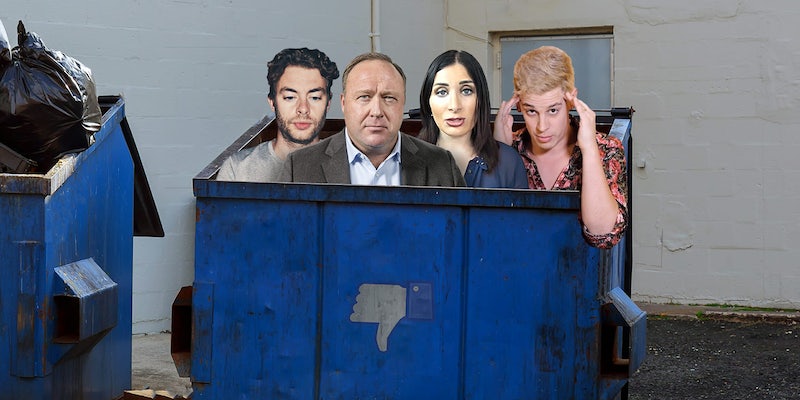 Facebook bans will push the far-right underground, but won’t make it go away

When news broke on Thursday that Facebook had banned a slew of far-right media figures, the natural follow-up question was: What will become of the far-right?

It also banned Nation of Islam’s head and avowed anti-Semite Louis Farrakhan, who the far-right often pointed to as proof of conservative bias in social media.

Most of these figures had run afoul of Facebook’s ever-changing content moderation rules before. Both Jones and InfoWars had previously been banned from Facebook, forcing them to take their prolific video-making operation to Instagram, where it was an immediate success.

This post, ludicrously claiming Joe Biden had a stroke during a rally this week, was in the top-20 of most engaged-with posts on all of Instagram and Facebook in the last three days.

Facebook also struggled to moderate Loomer after she posted an incendiary rant about Rep. Ilhan Omar (D-Minn.)—leading to a slew of death threats against the Muslim politician.

So where do they go now? It’s not going to be an easy question for them to answer, but it’s part of a vitally important question. Can the movement that rocketed President Donald Trump into office exist without the mediums that were fuel to its fire? Will social media crackdowns snuff it out? Or are these tiny bandages on gaping wounds?

The ban will hit some of these figures harder than others, due to previous suspensions some have already absorbed. Watson still has massive followings on Twitter and YouTube, and while Yiannopoulos is already permanently suspended from Twitter, his YouTube channel with over 860,000 subscribers is still up.

Nehlen has virtually no presence on his small YouTube channel and had been banned from Twitter in Feb. 2018.

YouTube itself has struggled with moderating content, but for now, seems OK with only banning the most inflammatory of actors.

For Jones, the loss of Facebook could prove devastating, as he’d already been banned from YouTube in August, and then from Twitter (and its streaming site Periscope) a month later. As the Daily Dot previously wrote after his August ban from YouTube, “[Jones’] social media outlets had massive reach, including 2.4 million subscribers to his YouTube channel, and 2.5 million followers spread over four different Facebook pages.”

At the time of this week’s, Jones had over 336,000 followers on Instagram, with a similar number following multiple Infowars pages.

Now banned from Facebook, YouTube, Twitter, Periscope, and Instagram, Jones seems to have few other places to turn. While Jones and his compatriots rant constantly about the endemic censorship and free speech violations they face on these platforms (while finding ways to get around their bans by using cutout accounts), these platforms are also far bigger and drive more traffic than anything else out there.

Our right to freedom of speech shouldn’t end where your feelings begin!

The deplatforming from YouTube already hurt Jones badly, as his site’s viewership was cut in half. Going to Instagram brought a spike in traffic, but that leveled off as well, leaving Jones having already lost a substantial amount of potential customers for his online store.

The platforms that would theoretically be friendlier to Jones, such as Reddit knockoff Voat and Twitter clone Gab, have either never built the kind of audience Jones needs to sustain his media empire, or aren’t designed to host streaming video. A perfect example of this step down in reach is when Reddit finally banned QAnon forums, including the r/greatawakening forum with over 70,000 subscribers.

The replacement message board on the more anarchic and outwardly racist Voat struggled to break the 16,000 follower mark. 8chan, with its anything-goes moderation policy, is another possibility, though it’s struggled with finances and law enforcement scrutiny, and its design doesn’t lend itself well to long videos. Nor do popular video apps like Snapchat, where Jones has a small and mostly private presence.

Another possible future home comes from Loomer, who also figures to struggle in the wake of her Facebook ban. Her YouTube channel has struggled to gain traction, and her suspension from Twitter has forced her to pull off more and more outlandish stunts to get attention. But Loomer was already directing followers to her page on the nascent messaging app Telegram, where she said of the tech monolith that banned her, “they want me dead.”

Laura Loomer is now directing fans to her Telegram on her supposedly banned Instagram. pic.twitter.com/Vw7iOmlIu3

Will the other banned figures follow her to Telegram? Most of the others still have thriving platforms and likely won’t need to. But Jones might see an easily exploitable market in Telegram, a Russian-founded instant messaging and VOIP app that claims to offer “true privacy and unlimited space for everyone.”

Telegram isn’t especially popular or well-known in the U.S., where Facebook Messenger and WhatsApp have mostly cornered the market on messaging. But it’s taking off globally, with about 300 million global users, and it picked up 3 million in a short period of time after Facebook and its platforms briefly went down in March.

Jones could also harvest his large following’s email addresses for a newsletter, though he’s already been banned from MailChimp. Finally, there are a number of far-right figures who still have large and active followings on Facebook—some of whom the Daily Dot examined as successors to Jones’ empire of conspiracy theories and unregulated supplements.

The replacement parts will be piecemeal, but it still asks a larger question: Will these bans have any effect? Many conservatives are considering building alternative media and social networks, such as Jordan Peterson’s attempt to counter Patreon. Could a network that’s dedicated to hate be far behind?

Will these bans—which almost everyone agrees were more about publicity than addressing the root cause—snuff out hate speech on the internet? Not at all. Is driving it underground the solution, where it can fester and build up without anyone noticing?

When Reddit banned QAnon conspiracies on the site, the movement didn’t slow down. It’s as big as ever, and its followers have grown more violent.

There’s already concern that Facebook’s pivot to private groups this week will enable a whole new set of actors to organize without anyone noticing, where leaders in racist movements can build followings without noticing or covering.

On platforms that don’t have policies on hate speech, that aren’t carefully watched, it’s possible that rhetoric like this could percolate more and explode in serious ways than ever.