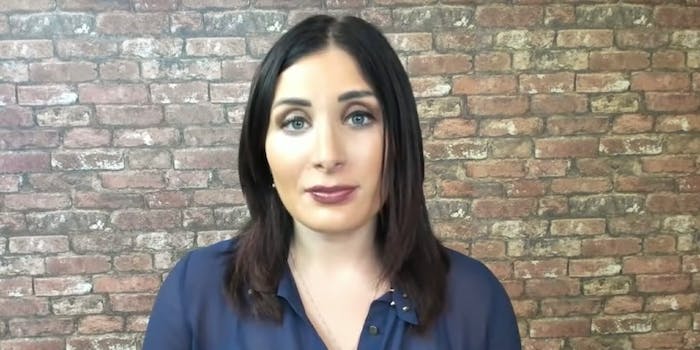 The site joins GoFundMe, Twitter, Uber, and Lyft among others.

Laura Loomer became a meme after handcuffing herself to Twitter’s headquarters to protest an account ban, then GoFundMe gave her the boot as well. Now the right-wing activist says PayPal is the latest platform to ban her.

Loomer posted a screenshot of PayPal’s notice on Instagram Tuesday. It did not cite a specific reason for the deactivation but explained that the site’s user agreement allows PayPal to terminate any account at any time. Several other platforms have banned the activist for violating hate speech policies by posting anti-Muslim statements.

A PayPal spokesperson confirmed the ban to the Daily Dot, adding that the decision was in accordance with the site’s values and “not political.” Loomer did not immediately respond to the Daily Dot’s request for comment.

Prior to the ban, Loomer often advertised her account to her fans, hoping their donations could offset the $40,000 in debt she claims she accumulated through her activism supporting President Donald Trump.

In her post, Loomer blamed her removal on a recent story by Right Wing Watch outlining her relationship with the anti-Muslim group United West, including donations the group purportedly sent her that Loomer asserts she never received. She goes on to claim she’s hired a lawyer to “[sue] all the Left wing terrorists and tech tyrants who are trying to shut me down simply because I am a Conservative Jewish woman who speaks truth about Islam.”

The remainder of her post outlines a supposed elaborate left-wing conspiracy led by the “actual Nazis in tech” whose efforts won’t be satisfied until Loomer becomes unable to support herself online because of all the negative press, ends up homeless as a result, and dies. She includes a P.O. Box address at the end for any fans who do not wish to see that happen.