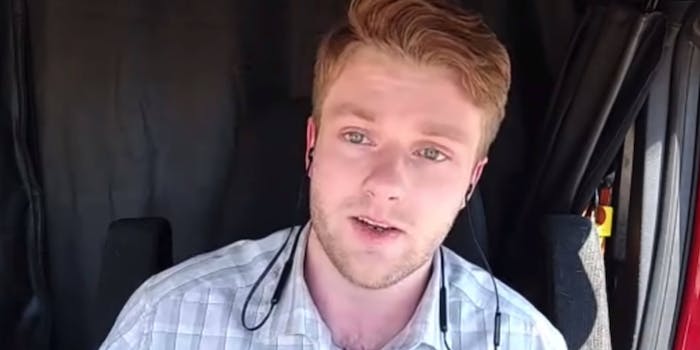 The deactivation comes just a few days before the filing deadline for the Washington ballot.

A rising figure in the Democratic left who made a name for himself by running a digitally native political campaign has now disappeared without a trace from the majority of platforms his campaign relied on so heavily.

Joshua Collins is a 26-year-old socialist truck driver running for Congress in Washington state’s 10th district to replace Rep. Denny Heck (D-Wash.). Heck announced in late 2019 that he would not seek reelection.

Collins’ congressional run has prided itself on being very attuned to the digital campaign trail since its inception. So much so that his handle, “Joshua4Congress,” has become synonymous with his actual name and campaign.

On Wednesday morning, Collins seemed to disappear from the platforms his campaign had seemingly been so in tune with. Collins’ Instagram and Twitter have both been deactivated, while his TikTok profile is still online. On his TikTok, Collins has over 76,000 followers, 2.3 million accrued likes, and self-describes as the “CEO of Socialism.” At the time of writing, Collins’ most recent video on the platform was posted about one day ago.

The deletion of his social media, even if it might be temporary, has sparked widespread criticism online. Some are coming to the conclusion that Joshua’s “grift” has reached its endpoint and that he has now absconded from the race with the political donations his campaign has received so far. According to figures from the Federal Election Commission (FEC), Collins has raised $205,000.64 in contributions for his congressional run.

Danni Shull, a political and communications director for the  Joshua4Congress campaign, responded to the confusion surrounding Collins’s disappearance through a Twitter thread.

In their statement, Shull specified that Collins has chosen to take a break from social media in order to improve his mental health. “I am not managing a neurotypical candidate,” wrote Shull in reference to Collins’ autism and the “struggles with his hyperfocus, the inability to disengage from the task at hand & consider his own needs/limitations” that come with it.

Shull elaborated further on these comments in the official Discord server for the Joshua4Congress campaign. “There’s a reason that everyone’s upset in his absence; it’s because y’all are used to having direct access to him as a candidate in a way nobody else lets you have,” they wrote. “Going forward you’ll see one of us grabbing the helm when he takes his days, but no content.”

All signs indicate that Collins has not dropped out of the race nor has any plans of doing so. Regardless, disappearing from the public online sphere while running a congressional campaign with no form of a press release sent out prior is not a good look or sound political strategy. The fact that the filing deadline to be on the congressional ballot in Washington is May 15 and Collins has yet to file does not help the situation.