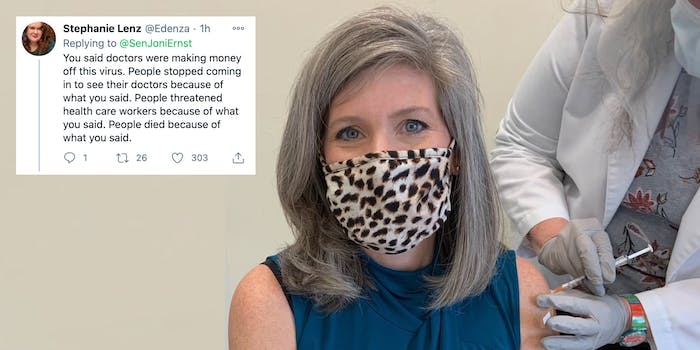 In a tweet on Sunday, Ernst shared a photograph of herself receiving the inoculation to her more than 57,000 followers.

“Today, at the recommendation of the Office of the Attending Physician, I received the first dose of the #COVID19 vaccine,” Ernst tweeted.

In subsequent tweets, Ernst encouraged her followers to receive the vaccine as well before stressing the importance of social distancing and wearing masks.

“I encourage all Iowans and Americans to do the same when their time comes,” Ernst wrote. Thanks to #OperationWarpSpeed and the tireless work of Americans across the country, we are one step closer to defeating the virus.”

Twitter users responded by highlighting comments made by Ernst in September in which she suggested that doctors were purposely inflating coronavirus statistics in exchange for monetary compensation.

“These healthcare providers and others are reimbursed at a higher rate if COVID is tied to it, so what do you think they’re doing?” Ernst told a constituent during a campaign stop at the time.

Aside from highlighting her previous remarks, users also expressed anger at the fact that Ernst was receiving the vaccine before most frontline workers.

“You accused doctors of lying and faking Covid deaths and taking money,” @LesleyAnnBrandt said. “Fuck you.

Users also took note of the fact that many politicians have worked to limit financial assistance to millions of people struggling during the pandemic.

“If you blocked COVID relief, sowed doubt about the legitimacy of the virus or the effectiveness of masks, please immediately cease posting pictures of yourself stepping to the front of the line for a vaccine,” @ilyseh said. “Better yet, give your spot to a healthcare worker still waiting.”

Ernst is just one of several politicians who have received criticism since receiving the vaccine over the past several days.