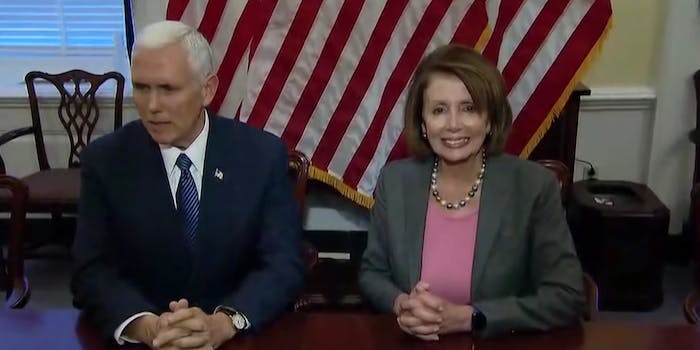 'The ruling class bragged about getting their vaccines while debating whether to cut us a $600 check.'

The internet is up in arms after Vice President Mike Pence and House Speaker Nancy Pelosi became some of the first people in the country to receive a coronavirus vaccine.

Both politicians received the Pfizer-BioNTech vaccine on Friday morning during televised appearances aimed at convincing the public to get inoculated as well.

While many see the act as a much needed effort to convince skeptics to receive the jab, others argue that Pence and Pelosi should be at the end of the line.

“I love how they are spinning this as representatives showing us the vaccine is safe when in reality this is showing us who is/will always be first in line for all forms of medical care on our dollar and at the expense of our lives,” @TheBlackLayers said.

Others are pointing to the fact that Pence is able to swiftly receive the vaccine, despite spending much of the last year helping President Donald Trump downplay the virus.

“We live in a system where the people who most fervently denied and downplayed the coronavirus are among the first to receive the vaccine,” @GabsOnClarkSt said. “This is so despicable.”

The pushback comes as public anger over the government response continues to climb, especially in light of the news that long-overdue stimulus checks may only provide struggling individuals with $600.

“Let us remember that as 2020 came to a close, the ruling class bragged about getting their vaccine while debating whether to cut us a $600 check,” @TeddyRedder said.

The animus isn’t just aimed at Pence and Pelosi. Similar sentiments are also being made after Sen. Marco Rubio (R-Fla.) received the vaccine as well.

“Really great to watch Republicans who did nothing to address the pandemic line up to vaccinate themselves before teachers, nurses and other frontline workers,” @BFriedmanDC said.

Even with the widespread backlash, others are attempting to argue that the vaccination campaign among politicians is a noble and worthwhile cause.

“Good to see Speaker Pelosi (aka mom) VP Pence and others PUBLICLY take the first dose of the #COVID vaccine,” @sfpelosi said. “Elected officials must keep government continuity and assuage concerns about vaccine safety, especially from BIPOC communities who have been odiously experimented upon.”

The vaccine rollout, which has already been beset by problems, comes as the death toll in the U.S. surpasses 313,000.