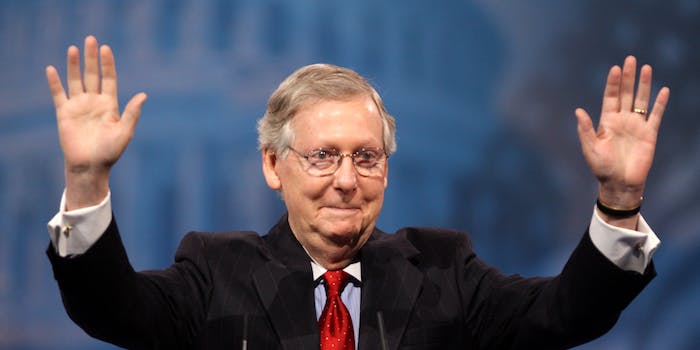 No one can believe Congress thinks $600 is enough.

After months of deadlock, over the weekend, congressional leaders announced that they’d reached a deal for a stimulus package meant to offset hardships caused by the COVID-19 pandemic.

Under the $900 billion stimulus, most Americans will receive up to $600. Democrats argued for more, but Republicans refused. To them, it was more than enough.

“It would be another major rescue package for the American people,” Senate Majority Leader Mitch McConnell (R-Ky.) said from the Senate floor. “As our citizens continue battling this coronavirus pandemic this holiday season, they will not be fighting alone.”

The American people beg to differ. People were outraged at the notion that $600 was enough to make up for the months of lost wages many have experienced during the COVID-19 pandemic.

Many people made points about the bitter irony of how the richest country in the world spends its bounty, such as on a tax break for corporate meal costs and $1.4 billion for the border wall, both of which are in this spending bill.

“So they have 740,000,000,000 dollars to wage wars and drop bombs on innocents all around the world…” tweeted Sarah Abdallah. “But struggling American families, small business owners and people who were forced out of work only get $600 after 8 months?

“There is something violently wrong with this picture.”

The outrage was palpable.

The package was unpopular with people across the political spectrum, with conservatives like Tim Pool and liberals like Andrew Yang equally blasting it as insufficient.

The dichotomy between the wealthy and average Americans was top of mind as people contemplated the bill.

Numerous Twitter users bitterly pointed out that while some rich people host swanky soirees for large, often maskless, groups, others struggle to make ends meet and video chat with loved ones rather than risk in-person holiday events. Along this same vein, others argued that $600 was particularly cruel considering that the ultra-wealthy like the Church of Scientology and Kanye West got millions in stimulus via Paycheck Protection Program loans.

Much anger was fueled by the fact that most members of Congress earn $174,000 annually. By Monday, 50,000 tweets about the stimulus included #LetThemEatCake, the line notoriously, although inconclusively, attributed to the last Queen of France, Marie Antoinette.

Others chose humor to cope with their rage. Comedian Blaire Erskine ironically referred to the $600 as a “trickle down treat.”

Americans don’t agree on much, but they are in lockstep about the $600 COVID-19 stimulus.