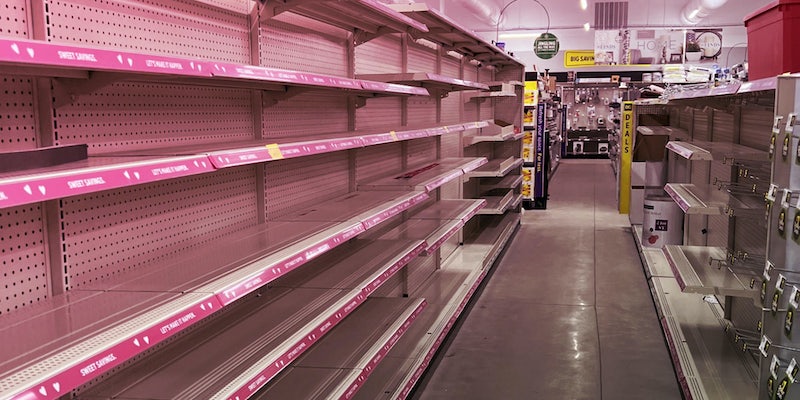 ‘Have you never seen a holiday switch?’: Jim Cramer gets dragged for misleading tweet about empty shelves

The Dollar General appears to have been simply restocking for Valentine's Day.

A CNBC host is being dragged for tweeting an image of empty shelves. People say the tweet is misleading because the store was simply restocking seasonal items.

Supply chain woes have been making headlines for months. Fears of lining up for groceries and holidays sans presents never came to fruition. However, the concern has persisted and there have been a few reports of shortages.

On Wednesday, Jim Cramer, host of Mad Money on CNBC, tweeted a picture of an empty shelf captioned “suboptimal.”

Many took him to mean that long-feared shortages were now a reality.

Pushback began immediately. Twitter users noted that the empty shelves were adorned with pink labels, hearts, and “sweet savings.” As Valentine’s Day is the next major shopping holiday, they concluded that the store was simply swapping out Christmas items for chocolates and teddy bears, and such.

“If you could please get the Dollar General valentines products out now, that would be….optimal,” joked @donmoyn. (One minute before Cramer’s “optimal” tweet, he tweeted a picture of a Dollar General captioned “field trip.”)

Many also noted that the shelves behind the empty aisle appear fully stocked.

Twitter treated Cramer to a ratioing. As of this writing, his tweet has roughly fives times more comments than likes—nearly 16,000 and 3,500, respectively.

People called his tweet “pure bullshit” and accused him of lying.

The mockery continued on Wednesday.

“It’s an ABSOLUTE TRAVESTY that they don’t have the conversation hearts on December 28th,” commented @natsechobbyist. “Where is the work ethic that made our country great once upon a time? No one goes home until the Valentine’s candy is on the shelves!!!”

Many of the commenters were familiar with working retail.

One person who said they’d worked retail for 24 years replied to Cramer, “The weeks after Christmas is a transition into Valentine’s Day. You condense and mark down Christmas and […] fill with Valentine’s Day stuff.”

“This tweet is just irresponsible, and you should delete it.”

Some seemed to feel that Cramer’s tweet cast a shadow on his qualifications to analyze financial markets and trends.

Mostly people just made fun of him, though. Many included “suboptimal” in their tweets.

“Could you walk to the end of the aisle and show us the fully stocked shelves? Or would telling the truth be ‘suboptimal’?” tweeted @dvillella.

Cramer has not commented further on the matter.