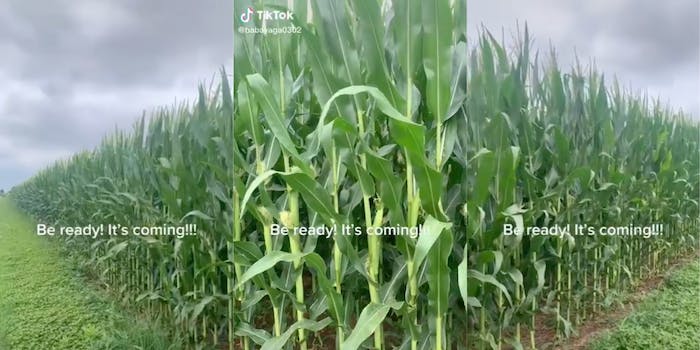 In a viral video, a right-wing conspiracy theorist TikToker alleges the U.S. government is trying to control the country’s food supply chain. But his claims are unsupported.

In the video, which has over 5 million views, Kentucky farmer @babayaga0302 shows what appears to be his cornfields.

“Every farmer I know has received a letter in the last 30 days from the Department of Agriculture offering them $3,800 an acre to dispose of their crops,” he says. “If they do not, they lose 35 cents per pound when they bring in harvest.”

However, he does not present any letter nor other farmers who can support his claim. His other videos are full of conspiracy claims concerning the U.S., its military movements, its supposed demise under President Joe Biden, and other unsubstantiated claims.

Though the video has over 5.2 million views and is not open for comments, it appears that people aren’t taking the bait.

As far as the notion of the U.S. government bent on domination through agriculture, the reality is that food supply shortages are already occurring. These shortages led to food insecurity during the pandemic, as the New York Times reported, and there was a “struggle to make food last long enough and to get food that’s healthful” throughout the country.

The strain reportedly fell “disproportionately on Black and Hispanic families, who are almost twice as likely to experience food insecurity as white families.” These shortages were also occurring before the pandemic. The Union of Concerned Scientists says the Trump administration was significantly detrimental to farmers’ collective existence.

This summer, drought and grasshopper invasions have devastated crops and forced farmers to make tough choices about which crops to save.

The project will reconsider food production and supply, according to Yahoo News. Its major goals are to assist new farmers, support local farming, cut greenhouse emissions, and help farmers transition to organic production.