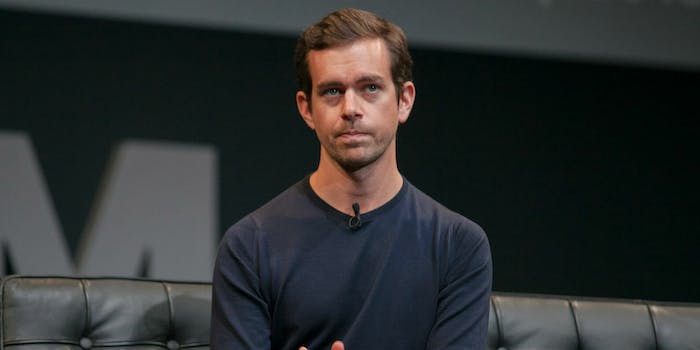 Twitter CEO slammed for retweeting man who is pro-racial profiling

In this case, people think a RT is indeed an endorsement.

If there’s one predominant issue people have with Twitter, it’s the prevalence of hate speech. Nazis tweet with impunity on the website, sending racist images and endorsing Hitler’s atrocities.

Everyone wants them gone, and to its credit, Twitter has stepped up its enforcement in recent weeks.

Which is why a retweet in June from Twitter CEO Jack Dorsey has sparked a heated debate. In the tweet, which has gone viral in recent days, Dorsey said he “learned a lot” from an interview conducted by New Atheist author, neuroscientist, and podcast host Sam Harris, who has been called out for his Islamophobic and racist comments in the past.

The interview with Sarah Haider, the director of outreach at Ex-Muslims of North America, is part of Harris’ provocative podcast Waking Up with Sam Harris, the fifth-most-downloaded podcast in iTunes’s Science and Medicine category. In the nearly two-hour chat, Harris and Haider discuss a number of controversial topics about Islam—like policies against wearing the hijab in public areas and the challenges of being an Islamic apostate.

“What percentage of people who are wearing a hijab or whose husbands want them to, think that infidels are fit only for the fires of hell and that apostates should be killed?” Harris rhetorically asks in the interview. “I’m willing to bet it’s a very high percentage. Maybe not everyone, but it’s damn high. We’re now in the territory of really being able to know what people think based on how they’re dressing.”

So when Dorsey retweeted a YouTube link to the podcast, commenting, “Learned a lot from this one,” his terse, vague statement was instantly met with disapproval from those who are not fans of Harris’ often-bigoted remarks.

I mean, this was a man who has repeatedly defended racial and Islamic profiling: “We should profile Muslims, or anyone who looks like he or she could conceivably be Muslim, and we should be honest about it,” Harris wrote in a 2012 blog post. “And, again, I wouldn’t put someone who looks like me entirely outside the bull’s-eye (after all, what would Adam Gadahn look like if he cleaned himself up?). But there are people who do not stand a chance of being jihadists, and TSA screeners can know this at a glance.”

It wasn’t hard for users to see Dorsey’s retweet as an endorsement of Harris, with some even linking the post to Twitter’s failures to police abusive and racist behavior.

Sam Harris is a bigot & a white supremacist @jack

Why would you endorse this ??

Sam Harris is a bigot. pic.twitter.com/pt0jkuICqQ

Many users asked for clarification, wondering what it is Dorsey learned from the man who once wrote, “Islam, more than any other religion human beings have devised, has all the makings of a thoroughgoing cult of death.”

Care to share what, specifically, you learned from the racist?

What exactly did you learn from this video, Jack?

Dorsey has yet to respond to the controversy or explain what he did indeed learn from Harris when he watched that clip back in June.

Twitter has long come under fire for its inability to curb harassment and racism on its platform. The site was forced to freeze its verification program following outrage from users who believe it endorsed Jason Kessler, the white nationalist who organized the Charlottesville rally and later insulted the woman who was murdered in the incident. It also made several edits to its controversial rules in an attempt to provide transparency into its decision making. However, recent erroneous attempts to ban “hate speech” raise serious questions as to how those rules are being enforced.