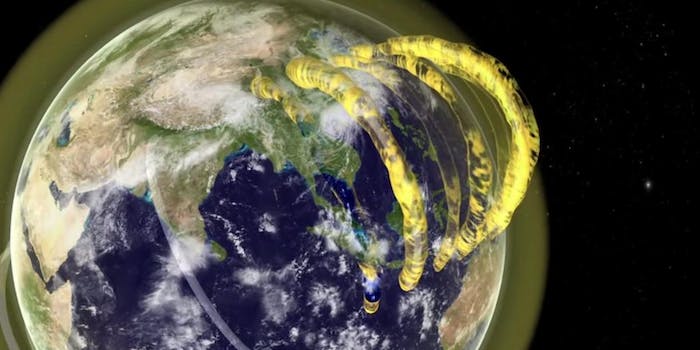 No really, the Earth is covered by a giant structure of plasma tubes

Most scientific discoveries in the last couple of decades exist on a microscopic level, sometimes literally but often in terms of nudging knowledge forward incrementally. These discoveries are important mostly in the short term to other scientists.

But a recent discovery has won the 2015 Scientific Discovery as Science Fiction Premise Award. (Given annually by the Daily Dot.) It is also a finalist in this year’s International Astrophysicists Union Oh My God We’re All Going to Die Award—neck and neck with the development of the man-eating robot cheetah.

A group of researchers in Australia led by 23-year-old Cleo Loi, astrophysicist at ARC Centre of Excellence for All-sky Astrophysic and the School of Physics at the University of Sydney, has proven that the Earth is surrounded by a shell of plasma tubes.

In a paper lead-authored by Loi with the sexy title of “Real-time imaging of density ducts between the plasmasphere and ionosphere,” she and her science chums confirmed a decades-old theory that the Earth’s magnetic field and the energy of the sun intersect to form huge tubes of plasma that flow around the Earth, interfering with satellite communications. If your GPS ever led you into a creepy compound in the middle of the night or made you Homer your car down a pier and into a lake, it’s the fault of the plasma tubes. And those who control them.

As Loi writes in the paper’s abstract:

Ionization of the Earth’s atmosphere by sunlight forms a complex, multilayered plasma environment within the Earth’s magnetosphere, the innermost layers being the ionosphere and plasmasphere. The plasmasphere is believed to be embedded with cylindrical density structures (ducts) aligned along the Earth’s magnetic field, but direct evidence for these remains scarce. Here we report the first direct wide-angle observation of an extensive array of field-aligned ducts bridging the upper ionosphere and inner plasmasphere, using a novel ground-based imaging technique. We establish their heights and motions by feature tracking and parallax analysis. The structures are strikingly organized, appearing as regularly spaced, alternating tubes of overdensities and underdensities strongly aligned with the Earth’s magnetic field. These findings represent the first direct visual evidence for the existence of such structures.

Loi and her crew used the Murchison Widefield Array, a collection of 128 radio telescopes in Western Australia in a novel way. Separating the left and right sides of the array (a collection of many radio telescopes spaced across a three square kilometer field), Loi formed a right and left “eye” and used them to focus on the plasma tubes in 3D, effectively “seeing” the tubes for the first time and discerning their dimensions and direction.

Plasma tubes exist in the Earth’s upper atmosphere, the ionized oxygen layer known as the ionosphere. Here photons from the sun smash into the oxygen and knock electrons, forming a sea of electrically charged particles. Interacting with the Earth’s magnetic field, the plasma is organized into “field aligned ducts,” creating rivers of space lava. The free-balling ions interfere with satellite, GPS, and even radio telescopic astronomy.

Furthering the science fiction premise, the older astronomers in Loi’s department were skeptical. Mercifully, Loi did not require a vague, new age, sexpot cleric to convince them she was right. She used moxie and sex appeal. Sorry, I read that wrong. She used something called “science.”

In a university-issued statement, Loi’s undergraduate advisor, Dr. Tara Murphy said, “When they first saw the data, many of her senior collaborators thought the results were literally ‘too good to be true’ and that the observation process had somehow corrupted the findings. But over the next few months, Cleo managed to convince them that they were both real and scientifically interesting.”

The implications of this discovery include the need to adjust observations when looking into the universe with radio telescopes, increasingly important, as most of the energy in the universe is not in the visible spectrum and radio telescopes are the best way to see the furthest not just in space but in time. Knowing the plasma tubes exist and knowing where they are may lead both military and civilian developers to create more accurate and robust satellite signals, or ways to receive them more reliably.

Finally, using science, we can tell that this set of creepy, swirling tubes of space lava zooming around Earth must have been created by aliens determined to imprison us and keep us from our rightful place in the universe. All we have to do is get uppity and they will trigger the tubes to restrict and cut through Earth like cheese wire through a Gouda.

You can tell this by the pyramids.